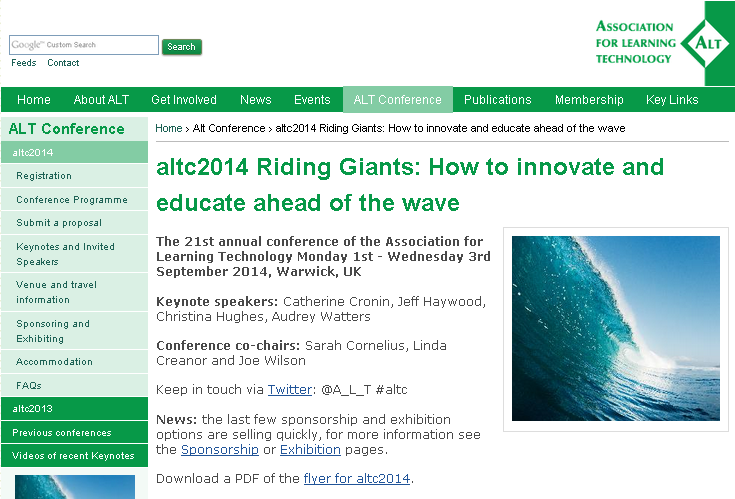 Just a quick post to plug my session at the upcoming ALT-C 2014 conference – “From FELTAG to ETAG – Time for Some NEET Ideas”. This will be an hour long workshop following on from the UK Government’s Department for Education recent consultation on the future of technology in education, and looking for actionable insights from learning technologists and other practitioners in the ALT community. I am particularly interested in ideas and experiences around engaging young people not in employment, education or training.
Here is some more background information about the session:

The Next Gen report highlighted that whilst the UK has around 100,000 tech vacancies that we are struggling to fill, we also have a million young people not in employment, education or training (NEET). European Commissioner Neelie Kroes states that there are around a million unfilled tech vacancies across Europe. Clearly there are massive opportunities in and around digital technologies, but the Next Gen report argues that a step change will be required in skills if the UK and other EU member states are to fully exploit them.

Popular perception of “NEETs” is of young people whose education ceased at GCSE level, and who might be considered a lost cause. However Lost in Transition, the Work Foundation’s report on the NEET phenomenon, notes that in 2011 nearly a third of young people classified as NEET had qualifications at A-Level or above, a third left school with GCSE grades A-C, and one in six had achieved other qualifications such as NVQs. Nearly a third had personal situations that made it difficult for them to engage with conventional education programmes, such as disabilities or responsibilities as carers for family members.
This workshop will will focus on practical advice and “actionable insights” from the ALT community to feed into the deliberations of the UK Government’s Education Technology Action Group (ETAG). ETAG advises the Minister of State for Skills and Enterprise Matthew Hancock MP on use of technology to improve learning outcomes and develop skills in the UK workforce. ETAG’s mission is defined as “to best support the agile evolution of the FE, HE and schools sectors in anticipation of disruptive technology for the benefit of learners, employers & the UK economy”. ETAG is the successor to the Further Education Learning Technology Action Group (FELTAG), which recently produced a landmark report on technology enhanced learning in the FE sector, including a number of challenging recommendations around new forms of delivery and modes of engagement. More information about ETAG can be found on the ETAG website.

The session will begin by leading delegates through ETAG activity areas (for around 20 minutes), and the rest of the session will be seek group input for ETAG on each theme. The facilitators will pass comments on to the ETAG team.