How to innovate and educate ahead of the wave, Pt.2 #altc

‘Riding Giants: How to innovate and educate ahead of the wave’ is the title & theme for the 2014 ALT Conference – my first ALT conference – and my second post, this one about the second day.

Well, when I say second day the first day never really stopped – one downside of being connected and part of a massive PLN is that the tweets, emails, DMs, mentions, etc. don’t stop. At one point at the end of day 1 I had to just say enough, put the tablet & phone down (to charge) and then go charge my own batteries. For those who were staying on site and continued the party & chats, you are clearly younger than me!

My Sketchnoting continues (it’s just too much fun to stop now) and I feel better at it again. Catherine’s keynote was so well paced and so well structured it was a joy to listen to and engage with; poetry, quotes, feeling, etc. Here they are: 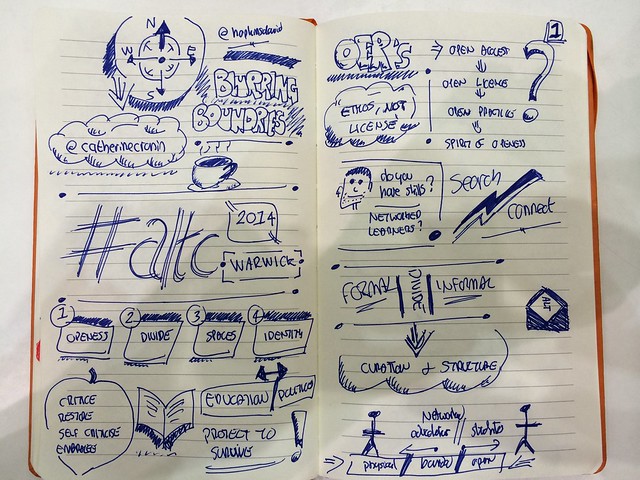 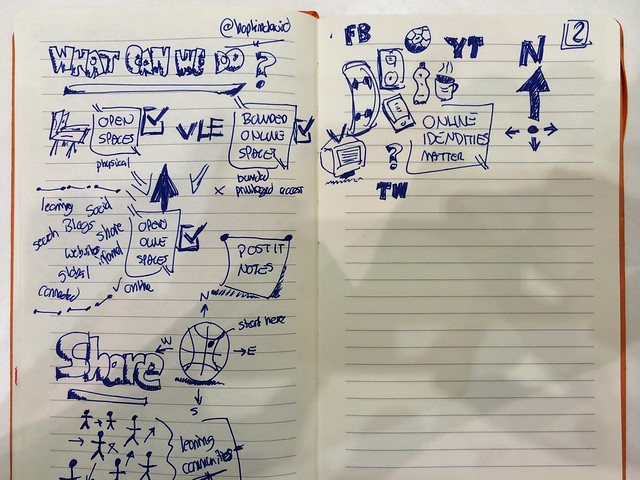 From Catherine to the different sessions, and the East Midlands LT Group, the day was enjoyable, a little too much talk around MOOCs (from people who said they wouldn’t talk about them), lots of engagement and intense brainstorming around so many varied and interesting topics (yes, including MOOCs), and ultimately so rewarding. There is clearly interesting and productive work going on around the UK, and there are so many people,passionate about it, but we all feel the same sense of despair at the bloated talk of MOOC success, inappropriate use of analytics to prove learning has taken place, or the apparent reluctance on academic buy-in on change. In our own way we are all changing these things just by either coming here or engaging with each other online, but it is those who are not engaging, those who have the ability to shape our directions, that we need to get to?

I can now be open about my inclusion as part of the Learning Technologist of the Year award, of which I made a short showcase presentation in support of the award itself. The award itself was made late in the day, much to my own embarrassment … I don’t like being the centre of attention, despite writing posts like this and seeing them retweeted and commented on around the world.

Getting ready for #altc