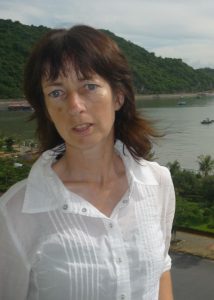 I’m currently in my second year of a PhD. I’m investigating the idea of selfOER that Suzan Koseoglu and Maha Bali proposed at OER16. Basically, it sees openness as a way of being or as a worldview and that an open educational resource (OER) need not necessarily be considered solely in terms of content, that the self, or open educational practice (OEP), might also be seen as an OER. I instinctively took up the idea because the notion of openness as a way of being really resonated with me. My journey into open education was as a result of participating in open scholarly networks and the cMOOC phenomenon that happened a few years back. Essentially, I became an open learner. Before gaining my scholarship at the OU and moving back to the UK, I worked in adult and community education on the West Coast of Ireland. I taught literacy and ICT. Sadly, I was never really in a position to develop this in terms of open educational practices. It’s my own professional development that’s really benefited from open education initiatives and the networked sharing practices of open educators or scholars.

I only recently volunteered to join the OpenED SIG committee. I thought I could help out and learn more about open education into the bargain. I’m particularly interested to learn of open initiatives that support critical education and adult basic skills as well as how openness plays into the future of work and the digital university or digital scholarship. In pursuit of equality of educational opportunities and a more just society, the OpenED SIG works to draw the different strands of open together and to remain vigilant to the threats. It’s a wonderful initiative, and one that it would seem owes a lot to the sterling behind the scenes work of Teresa MacKinnon, Deb Baff and Viv Rolfe (currently on other duties as co-chair of OER18).

We have an open community space and forum where we invite all interested in Open Education to discuss and share in order to help us inform policy makers and bring together the many voices of Open.
If you are an ALT member you can use your ALT credentials to post in the community forum. If you are not yet an ALT member you will still be able to post to the OE SIG forum by clicking the image below and registering as a community group member.

The Open Ed Blog is published by the Open Education SIG hosted by the Association for Learning Technology (ALT). The views expressed on this site are the opinion of the author and do not necessarily reflect the views of ALT. The text on the Open Ed Blog is unless otherwise indicated licensed under a Creative Commons Attribution 4.0 Licence.