Yesterday I attended our new series NetworkEDGE: The Future of Education online, because we live stream (and record) these things and therefore I could. We were lucky enough to have Stephen Downes inaugurate, and I watched, listened and tweeted along.

Downes shared his utopian anti-institutional view of education with us and that’s the kind of thing I lap up. He pleaded for “learning beyond institutions”, towards personal learning in a networked world. This is the impression I got: here’s a dedicated anti-establishment guy, who despairs at the capitalist ideology at the core of education; who dislikes that learning is now an industry; who thinks that most educators waste time and effort in their attempts to improve their teaching, their learning. Wasted, because it goes towards improving essentially capitalist systems, structures, models, even though these fail us (us = the learners, the educators) time and again. How much better to smash our educational idols, and to break away, move away:

(“Smash”, “idols”, “beyond” – of course Downes is no Nietzsche, but there is a certain Nietzschean sentiment in his ideas). 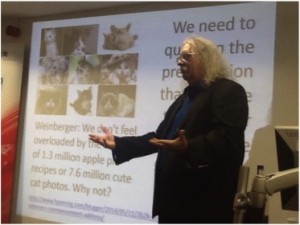 “The right model is to do away with models” he told us. – this is an idea I can get behind, a nicely phrased aporia, along the lines of  “O my friends, there is no friend”. Now, one might argue that Sugata Mitra’s Hole in the Wall, which Downes referred to, is itself a model, Mitra often suggests so: that’s why he was able to translate the idea from rural India to schools in England. His model is anti-institutional, it seeks to depose the teacher, but it is still a model. Like Downes, Mitra is interested in self-organising systems – and where you have systems, you have a model! The point is that there are no standards or rules which apply consistently or work universally and at all times. This is a good thing to bear in mind. Standards (rules, regulations) are always exclusive, limited and limiting. They hinder innovation, stifle creativity and reduce everything to sameness. We need people like Downes to remind us of this. We need to be asked that we do away with ALL such rules, so that at the very least we might discard some of them, and re-introduce autonomy into our sector. As he told us later “Autonomy, rather than control, is essential in education”. This is as uncomfortable an idea for institutions as it is for the individual. Control is something we desire (if not need), whereas autonomy can often be disquieting. However, some claim control is an illusion anyway, so we might as well move away from trying to control our learners and allow them their autonomy.

I agree with many of Stephen’s principles, even if I do so at my peril (i.e. by sort of wishing the hand that feeds me would whither and die). Wouldn’t an anarchic utopia be fun? Yes it would. Will it happen? Not any time soon. Still I applaud Stephen for demanding it.

But I don’t agree with everything he claimed. For example, his starting claim that “pretty much anything works better than the traditional lecture method” – but that’s neither true nor very scandalous. (Indeed it seems to me a standard opening in ed talks these days.) I learnt a lot from Stephen Downes’ lecture yesterday, and I know that discussing an article or blog post of his instead would not have worked better; it would have worked worse. Naturally, he addressed the irony of him lecturing (a full 90 mins!), but suggested that the lecture itself was secondary to its becoming  a resource to be shared. Yet my engagement was greatest at the actual time of listening, and throughout I wished I had been in the room with others. Yes, I agree that his lecture was “about creating the opportunity for dialogue and interaction” and that it served this purpose well. But surely this is what all lectures (can) do. No one working in education seriously believes that learning is about remembering, about recall. Yes, assessment practice tends to reward recall, and thus it places value on it, but this is what is fundamentally wrong about assessment practice, it is not evidence that we think learning is recall. Call the paradox a logical error, do not extrapolate that it shows a greater truth about our values.

Secondly, at some point I started to wonder if Downes equated learning too much with reliance on resources. Resources (and tools to create and share these) are central to his connectivist MOOC, as are the connections between learners and the conversations they have. But I missed a closer inspection of that elusive thing, ‘learning’. Sure, he reminded us: “content is only the MacGuffin” (think Maltese Falcon), there to move the conversations and relationships along, and he insisted that “learning is the conversations that happen’ – but this is not quite clear or useful enough for me. Learning cannot all be conversation, and often it benefits from leadership too. Autonomy and self-organisation are all well and good, but I’ve overheard serious conversations so dumb they’d blow your socks off, and they could have benefited from an expert gently pointing out that what had just been discussed was a) factually wrong and b) badly argued. But where does such expertise come from in self-organising networks? Finally, in Downes’ self-organising networks, won’t the “filter bubble” effect prevent networks from being properly diverse? Won’t these self-selected online communities, be obstructed from benefiting from ethnically, socio-economically, politically different perspectives?

Finally, I am skeptical about his over reliance on technology. I tweeted a question to that effect, and he did his best to answer, but he thought I was worried only about “what happens when the lights go out” and reassured me that there are bigger threats (authoritarianism, big corporations – I know that, they too are technological systems!) than running out of fossil fuels. I meant however to ask what effect our over-reliance on technology might have on our way of being: our relationships, attitudes and social behaviours. I don’t share Downes’ optimism about technology. I think it is important to evaluate our use of it critically at all times, and question its proliferation, especially in education. I imagine Downes doesn’t disagree with proper critical questioning, but I nevertheless suspect that he overall thinks technology is a boon.

This article originally appeared on the CLT@LSE blog at http://blogs.lse.ac.uk/clt/2014/07/10/beyond-institutions-stephen-downes-at-networkedge/. Photograph of Stephen Downes by @jsecker CC