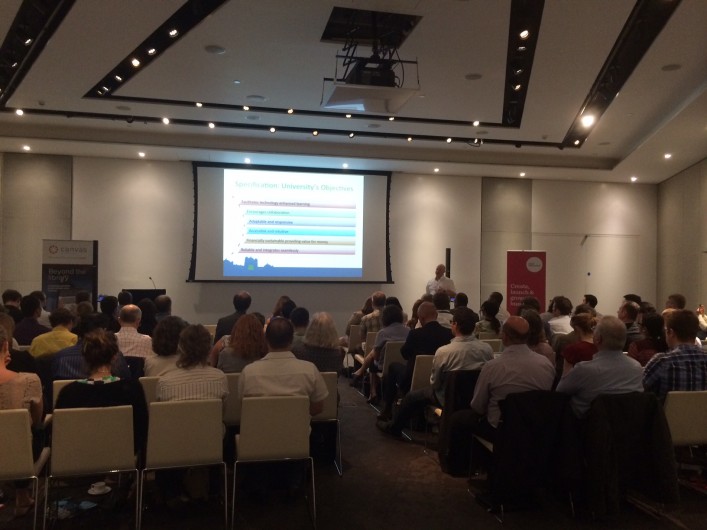 On 21st May, Instructure held an event at the ME Hotel on The Strand in London to celebrate the launch of the UK Canvas offices. Over 70 people primarily representing HE and FE attended the event which aimed to introduce the UK market to what Canvas can provide.

The event opened with the history of how Canvas started – it was a computer science project at Brigham Young University to create a usable VLE. One of the key messages for the UK market was the commitment to the UK through a local UK team with development capabilities and the intention to make Canvas cater for the UK specific needs.

Canvas at the University of Birmingham

Matt Sherlock, University of Birmingham, presented the University’s recent VLE review process which led to their decision to adopt Canvas as the institutional VLE, replacing Blackboard’s WebCT product. Usability was a key part of their review process, accounting for 20% of the final decision. Their reasons for choosing Canvas were based on a number of ‘-abilities’ including:

Matt acknowledged there are risks of choosing a product with no history in the UK, but there was an appetite within the institution to be distinctive amongst peers and it was felt that the benefits and opportunities outweighed the risks.In terms of the roll out, they had created over 4,000 Canvas courses by start of term accounting. WebCT is being run in parallel for 1 year, but only 350 courses remaining (10% of what was there last year). They trained over 600 people on the new system, but found that the majority didn’t require training due to the ease of use of the system.

The move to Canvas has been positive and Matt noted a reduction in the support demands from staff and students. WebCT had generally been used as a repository, but now they are seeing a broader use of the VLE and its toolset, especially communication tools, and staff seem more engaged and willing to try other features. There has also been use for non-academic purposes, such as the student counselling team. Student feedback has been positive, primarily in terms of its ease of use.

It was noted that currently there are some features not yet available such as anonymous and multiple marking, fully featured integration with Turnitin and no support for SCORM, but these are on the roadmap.

Christina Conroy presented the experiences of Coralesce, a small company who provide online learning to learning and skills sector. They were previously Moodle users hosted by an FE college. As part of their VLE review they looked at what US community colleges in Seattle and Vancouver were

doing and saw examples of supporting online apprenticeships with Canvas. In addition, a tender for Washington State had thoroughly tested 40 VLEs and had chosen Canvas. One of their key requirements was to be able to provide individual user licences to use CPD materials rather than just an institutional licence.

Christina highlighted two projects which will be using Canvas:

The reasons for choosing Canvas included:

Richard Horton introduced what Canvas can provide in terms of hosting via Amazon Web Services and highlighted key benefits of cloud hosting:

Overall Canvas provides similar functionality to other VLEs – communication tools, assessment tools, content delivery – with some potentially useful features such as notification integration with Facebook/Twitter. It’s great to see that Canvas integrates with over 140 tools via LTI, however depending on the implementation of LTI it may mean the integration is not as fully featured as existing plugins developed specifically for systems such as Blackboard and Moodle. Functionality such as anonymous and multiple marking is not currently available, but Canvas assured us they are working on it. In addition, there is no provision for SCORM content.

In my opinion, Canvas still has some ground to catch up on in the UK VLE market, which has long been dominated by Blackboard and Moodle, however it’s definitely one to keep a watching eye on. Instructure appears to have a committed focus on the UK market, something that has been missing from other VLE providers in the past, which may make them a viable option in the future.