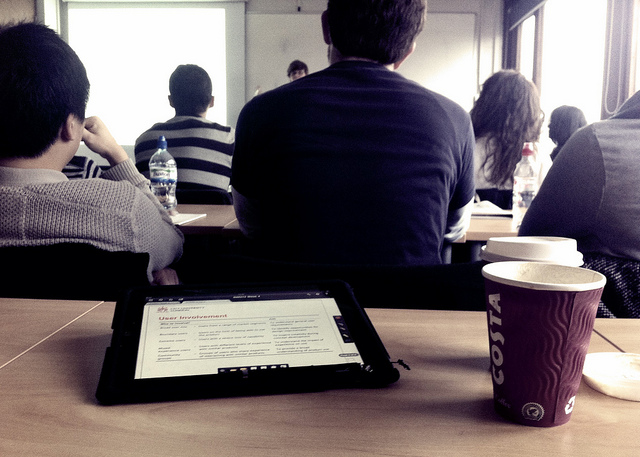 Using Technology in the Classroom – a mini case study

Should I let my students use their own devices in the classroom?

Some of my colleagues strictly banned their students from doing so. One of the everlasting complaints is that students may misuse technology when in the classroom, as we constantly see them on their smartphones – chatting, on Facebook or Twitter,  It can also bring a different set of challenges as instant access to the web enables students to challenge lecturers.

I wasn’t fully convinced that all electronic devices should be switched off but also wasn’t comfortable losing eye contact during my teaching. I was curious and decided to explore the use of technology in learning and examine the impact on learning outcomes. This post shares some of my experience.

Both groups were sitting in a circle shape at the start of the project. In group A, books were the center of attention with students sharing and using pen and papers to take notes. In group B, each student had access to the Internet.

In group A (after 10 minutes) and in Group B (after only a few minutes), visible changes in the dynamic and the structure of the groups appeared. Group A appeared to be interacting, exchanging ideas and participating all together, whilst group B were quieter and divided into 3 or 4 subgroups, each working on a different task.

Another visible difference developing between the two groups was the progress made – group B was progressing much faster than group A. I also acknowledge a higher degree of engagement in group B by using their electronic devices. When the time was up, group A was ready to present, whereas group B requested for few more minutes to get organised.

The comparison between the two presentations was interesting. Although group A’s presentation scope was narrower and it didn’t have the same richness as group B, it did benefit from a better structure. The presentation lacked the reasoning and it wasn’t visually appealing, other than a good hand-drawn illustration.

A student from group A, said he felt he “was paralyzed” by not having access to the search engines but he mentioned how he exchanged ideas with other students who he normally he doesn’t talk to. In the same group, another student said she enjoyed working with others as a team and she liked talking to others. In group B, a few students reported they needed more time to filter the huge amount of data on the Web.

From the observation there appears to be pros and cons to both methods. The final presentation was better from group B from the point of quality of content and scale of information, but of course there are other factors that should be taken into account. Did all students use their devices for educational purpose? What background knowledge might they have before the lecture? Does group B’s better presentation mean a more effective and deeper learning across the group?

So whilst my observations have been interesting in identifying differences between groups with and without technology, there is a lot more to be done to draw any solid conclusions, and being able to identify the characteristics that make up effective classroom interaction in both scenarios. Quite whether one method is more effective than the other, may be something to difficult to conclude…