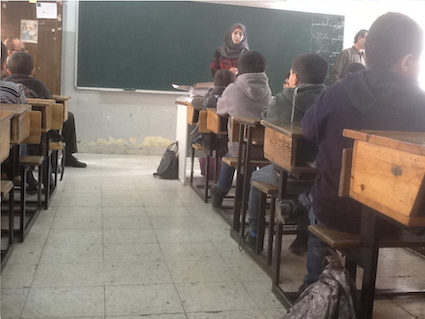 A classroom in Palestine (Photo by John Traxler)

Digital literacy is a prerequisite to digital learning, and a vital aspect of the working lives of learning technologists. It embraces the knowledge, skills, attitudes and access that enable individuals to survive, prosper and flourish in an increasingly digital world. Its conceptualisation and implementation have however mostly taken place in the developed world, specifically Europe.  Even in this relatively stable and homogeneous environment, its development has not been uncontested, with fears it is merely the IT curriculum rebranded for the current graduate employment market.  Outside these environments, however, the challenges and opportunities can be dramatically different, as can the cultural, educational, political and technological contexts.

Palestine is under Israeli occupation. There are pervasive problems in maintaining the continuity, consistency and quality of a school system under constant pressure. This is due to “routine” interruptions and disruptions from the occupation, specifically the checkpoints, curfews and closedowns, but also episodes of injury, imprisonment, violence and death.

Digital technologies could be used to address each set of problems and challenges on a reactive and piecemeal basis but part of the research described here used fieldwork to explore the possibility that ‘digital literacy’, in the form understood and experienced by learning technologists in Europe, was inadequate elsewhere and specifically in Palestine because of:

This blog discusses empirical research to explore digital literacy within the context of the Israeli occupation of Palestine specifically in relation to teachers and their students, by focussing on accounts of the impact of the occupation and on the current use of digital technologies. Many poignant quotes illustrate the situation; one teacher says

The learner suffers from a psychological crisis and sleeps next to his family in Al- Shweikeh because one of his relatives was martyred and the soldiers come every night to search the house which led to the child’s fear of everyone at school and the constant going to the lavatory.

This is just one quote, typical of many, coming from Palestinian primary teachers in Nablus, in the north of occupied Palestine. They were describing the impact of the Israeli occupation on their professional lives and the lives of their learners but also describing the role of digital learning technology in a complex and troubled environment. The quotes come from focus groups held in December 2018 with six groups of teachers on the campus of An Najah National University in Nablus, organised by the Faculty of Educational Sciences. The topics grew out of a large-scale survey of over 500 teachers that explored the impact of the occupation on teachers’ professional lives.

One teacher remarked that no child in her class was unaffected by a death or wounding in the immediate family.

To give some further context, the teachers describe the difficulties of the daily commute, listing,

“The daily checkpoints between the school and the house, involuntary returning from the checkpoint to the house, the late arrival [at] the school, the separation wall and standing in front of the gates for hours.”

And interruptions to teaching and learning, variously

”Teachers are afraid when the Israeli soldiers pass by the school; that affects my performance thus reduces the quality of teaching.”

“The Israeli army’s entry into the school leads to violence and squabbles which affects the learning environment.”

“The presence of the tank in front of the school and the denial of access to the school were a major reason for our inability to focus on education as the time was wasted by talking about it amongst students.”

The teachers also describe how learners are affected by experiences in their everyday lives outside school,

“… having an empty chair with a martyr’s photo on it and the refusal of students to sit on the chair in order to commemorate and respect the martyr, leads all the students to continuing talking about him and remembering the incident.”

“Absence from school to visit family members in prisons such as mother, father and its effect on the student’s psychological health, lack of financial resources because of the occupation, and the limited education to rote learning because of the absence of activities.”

“The mother sleeps in prayer clothes because the soldiers might invade the house while the family is sleeping, the arrest of students at a school in one of the Jenin camps, …”

Parts of both the survey and focus groups explored teachers’ use of digital technology, such as SMS, websites and videos, to support learning in the face of the situation they describe. They used whatever was available, but the survey revealed technically savvy teachers in reasonable well-equipped schools alongside other teachers with much less competence, support and infrastructure.

The findings also described the combined impact of the lack of specifically Palestinian digital resources and of restrictions on travel, particularly to Jerusalem, depriving their students of a fuller sense of their Palestinian identity.

The methodological details are available (Traxler et al 2019). This followed earlier work (Traxler 2018) that was critical in a more general sense of the gap between the high ideals in which digital literacy is conceptualised and articulated and the patchy way it is often then implemented. This would be especially worrying if it was uncritically ‘copy-and-pasted’ on to the Palestinian education system. Given problems with criticality and capacity in parts of academia in the cultures of the Middle East, this is a significant risk. The findings could underpin a more comprehensive and appropriate definition of digital literacy for the Palestinian education system, from kindergarten and schools to higher education and adult community learning. This would start from a more holistic and comprehensive analysis of the threats, pressures, experiences, resources and opportunities of individuals, their community and their culture and asking how digital technologies can contribute to lives and learning that they value. Digital literacy could be defined as the attitudes, access, competences and knowledge to take them from the former to the latter. This approach would moreover be generally applicable to any community and culture, thereby creating greater ownership and understanding of digital learning.

This project, funded by a Council for British Research in the Levant travel grant and led by John Traxler, assisted by colleagues from An Najah University in Nablus, built on the author’s on-going missions and projects in the region, including significant work with UNRWA, the British Council and EU Erasmus programmes, in Palestine, in the wider region including Lebanon and Gaza, and with refugees in Europe. An earlier blog post by John Traxler describes “A couple of days’ work in Gaza“.