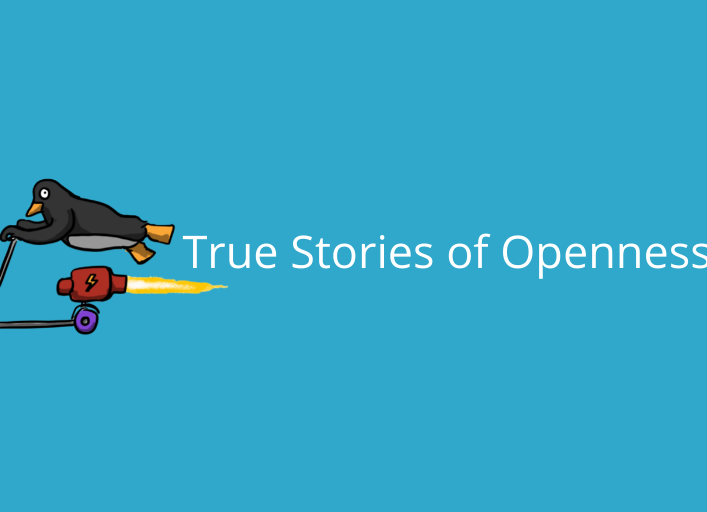 You do want to know what comes next, right?

That’s the the opening “hook” of excitement, intrigue, a hint of a journey that makes up the best of stories. And experiencing these myself, pretty much as an accidental by product of sharing openly, has made it part of the kernel of my operating system long before there were things like open licenses. Sharing was not in the expectation of receiving as much as doing what others had done to help me.

I define these stories (with some help of ye olde browser inspector) as web serendipity.

An important element missing in the above definition is that serendipity comes without expectation of it, as the factor of surprise. The all time story for me started with a flower in Arizona and went to a room in Hobart, Tasmania.

If you do not desire having unexpected amazing beneficial events, feel free to exit this blog post. Is anyone left here?

I thought you would stick around. Or I hoped. If you do not want to wade through my meandering long post, I am also making a plea in the video version.

If anything, 2022 (how some have cleverly said this year is 2020, Too) is a time even more calling for stories that can give us some humanity to hang on to. Is that dire? Well, after many years of this, I am not ready to give up.

The excitement of these in my own life and career have always made me want to do what I can to have other people experience them. And what seems to enable web serendipity is acts of openness. That is where Amazing True Stories of Openness is like an old television show I would like to renew at the April OER22 conference.

With the ongoing certainty of future uncertainty, one thing on the 2022 horizon I can count on is the energy of the ALT OER conferences.

I knew of them from a distance for years and count myself fortunate to have attended in person (how quaint does that sound) in 2014 (Newcastle) and 2018 (Bristol). If I believe in numbered patterns, 2022 should have been a year to be there, but as we all now, all patterns have been put askew.

This is the second year I have volunteered on the conference planning committee, and to break my pattern of meeting disdain, these are video screen meetings I look forward to.

The conference aim is to create a “spotlight on both the value and limitations of Open Education in a (post)pandemic world” and includes under Theme 1 ” Pedagogy in a time of crisis – what does an ‘open’ response look like?” I find myself, as more often as not these days, to both look back and forward, and land on the part of my path that I can always count on to find meaning- storytelling. This has been a continuous basal layer to the sedimentology of my career work (not done yet!)

Do I need to make a pitch of the google-able rationale of the power of one of the most universal communication genres? In thinking of something to pitch for my own presentation slot at OER22, again, I took a glance back in the blog time machine where the dial was set to 2009.

I had the means through my work then to make plans to be at the Open Education Conference that was hosted in Vancouver (shreds of it are found in the Internet Archive). Storytelling as a creative act that had its place in learning was in my bag of interest, from the interest in 50+ Web Ways to Tell a Story and a mutual interest with my friend/colleague Bryan Alexander in what we coined in an Educause Review article as (which sounds dated as I type it) Web 2.0 Storytelling .

The memory circuits are thin on where/when the idea came from, but looking at the program and the things of interest then, the focus in Open Education seemed to be on the Open Education stuff – content, resources, courses, MOOCs. Not on the “open” itself. And I had been so fortunate to have had a few experiences where something I shared openly on the web and somehow gotten “found” and reused or just appreciated by someone elsewhere in the world. It seemed magical, and quite motivating when one of “those” emails arrived or maybe a message of appreciation, or unanticipated reuse came via that weird newish site called “twitter.”

My thought was then to collect and share at the conference these small stories of “amazing” unexpected outcomes that came from sharing. Hence the very first iteration, August 2009 of using a retro magazine cover theme of “Amazing Stories of Openness” (I will leave out for now the copyright issue that led me later to changing the title and imagery to “True Stories of Openness”)

The pitch them for the session feels to me the same as 2022:

While the Open Education movement focuses on institutional issues, a large ocean exists of powerful individual accomplishments simply from tapping into content that is open for sharing and re-use. As colorful as old covers of “True Stories” magazine, this presentation shares moving, personal stories that would not have been previously possible, enabled by open licensed materials and personal networks. Beyond my own tales, others have been culled from the net, and you can share your own.

Maybe now as then, this still is fuzzy without an example. And my go to story is the one that to this day is mathematically improbable. And while it lives in a blog post and a caption to a flickr photo, what I wanted to share were short videos of people telling the story in their own words.

Sometmes you have to model it before anyone else will do it.

I wanted to have these stories as signs that at the heart of all this “open” stuff and people around the world tethered to network connections, that an attitude of openness, a core way of being, was maybe more essentially that licenses and repositories of “stuff.”

To collect those stories shown that first year, I asked a lot, but most came when I tapped some people individually or when they hinted they might have a story, I would organize a Skype call and just record it (yes Skype, that’s how long ago this was), publishing a site by hand spun HTML.

As yet another aside here, a thing I was able to do while presenting was to do live from the web using a (now dead, thanks Flash) plugin called CoolIris which enabled a snazzy 3d wall of media I could navigate through sequentially or at will to play video ot show screen shot images, all linked to web sites (if you are that curious, I was able before the complete death of flash to make a video that showed it in action). At least I got several years of use out of CoolIris, it truly was maybe the perfect vehicle for presenting these stories.

But Alan, do not get caught up in usual about the cool technology.

I had a few opportunities over the years to revive and renew the presentation. In hindsight the “amazing” adjective I used might be problematic as when asked to share, many people might shrug and say, “my stories are not amazing.” I would do anything to collect them, I would even solicit volunteers in the audience to stand up and share, and I (with permission) recorded them for posting (c.f. Alan Has No Shame in Collecting Stories, 2014).

You can see and share your own stories in 2022 at http://stories.cogdogblog.com/

I had this inkling again to make calls again for stories. Tweets like this whisper of the presences of a story

I know this as Lisa is in Ontario, and Helen (@ActiveLearn) who she mentions is in Australia and Sherri (@ediiedlistener) is in Austria, people still in touch 10 years after participating in the early ETMOOC experience. I can sense the story, but you know how tweets just flow down stream. I’d love to have a told version for the collection.

I was not there at the time but I do remember the story of a story via Ken Bauer who runs the wonderful #educoffee drop in sessions, and one of the first ones when Lawrie Phipps was there. A casual mention by Ken of his Dad’s experience in the navy led to one of those moments when they realized Lawrie and Ken’s Dad were at one time on the same ship. Amazing! Lawrie has blogged it, but the story would be so rich told in their own voices. And maybe this is not purely about pen sharing, but then again, Ken’s opening of a place for informal connection across distances, enabled this bit of serendipity to spark.

I see examples flitter by all the time, but have not made much effort to chase them. I have rebuilt the collection twice in WordPress, it’s latest iteration run via a SPLOT theme where anyone can add a story in many kinds of media (link to hosted YouTube/vimeo video, audio via SoundCloud, uploaded audio or images). The collection of past, and maybe future stories I can collect now and between the April OER22 conference is at https://stories.cogdogblog.com/ and anyone can use the share link to add one (even if my proposal does not make the cut the site remains open). Not sure what the heck I am talking about? Try the random wheel spinner to listen to one of the 103 stories collected there from 2009 onward.

So here at the trailing end of a rambling blog post, I am not even confident I have made a case for these stories or described them well. I will get myself into gear and add some more of my own.

Whether amazing or not, if you have made an unexpected connection with a colleague prompted by a blog post or a social media exchange, had an experience where your open shared content has been reused and acknowledged, or just any kind of connection over shared things that made you just whistle “wow” to yourself– those are what I seek.

And I wonder if the “feel” of stories here in 2022 maybe are a different flavor than 2009, such a naive time in hindsight. My idea may be just a tired rerun of old shows, or maybe it is a new, vital season. I hope to bring this message that Web Serendipity Matters to the OER22 conference but plan as well just to do it.

Amongst all we have weathered in the last two years and the stretch to come, these human level connections enabled by small acts of open sharing, offer a solace. At least to me. I hope it does for others.

Have failed to mention you can see and share your own stories at http://stories.cogdogblog.com/?

Note: This post being written to be cross published at ALT-C as a guest post for OER22 but just in case the penguins do not approve, I hang it here, in the space that I will never cease to stop publishing to.

Featured Image: Animated GIF remixed from pxhere tv image public domain image shared under CC0 plus OpenEd09 flickr photo by courosa shared under a Creative Commons (BY-NC-SA) license and a screenshot of the current True Stories of Openness web site created by Alan Levine. Oh, you might spot a few GO-GN penguins borrowed from Open your work by @visualthinkery is licensed under CC-BY-SA. Remix by Christina Vines. Wow! That makes this whole GIF enchilada licensed CC-BY-SA.