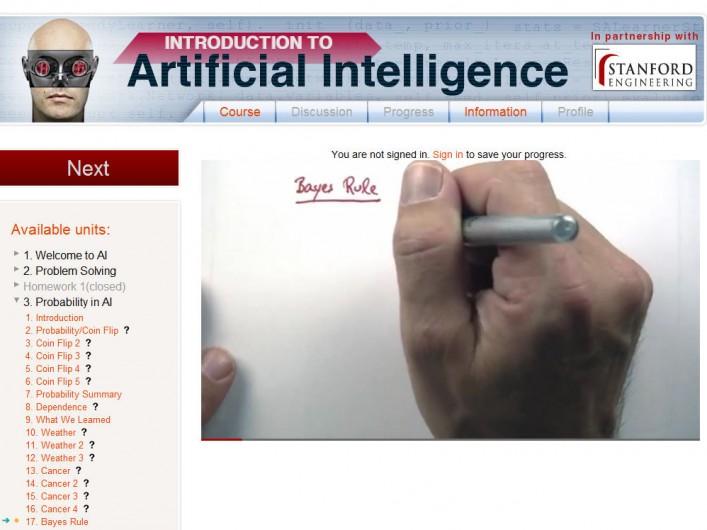 What Can We Learn From Stanford University’s Free Online Computer Science Courses?

At the end of July 2011, Stanford University announced that three introductory one-term undergraduate courses would be available free as online distance learning courses during the October to December 2011 term. Each course is taught be people who are leading figures in their fields, and in some case more-or-less the leading figures.

Here are links to the descriptions of each of the courses:

Helped by plenty of media coverage (including from the New York Times, The Daily Telegraph, and The Independent, tens of thousands signed up for each of the three courses: in the case of the AI course, around 90,000 had enrolled within two weeks of launch, rising eventually to over 130,000 from over 190 countries, with a median age of ~30.  Around 50,000 had signed up respectively for Machine Learning and for Database Design.

What follows is an “interim report from the field” from a committed participant on the AI course, which commenced in October. It draws in part on the weekly reports I am writing about the subjective experience of being a learner on the AI course.

I think there are several overlapping reasons why people in FE and HE should take the Stanford initiative particularly seriously:

1. A “world class” institution with “world class” teachers seems be in the process of biting on the bullet, by making some of its undergraduate courses freely available globally, on really big scale, whether or not with a view to charging students for such courses in the future.  Two insouciant tweets by Sebastian Thrun just before the course started may be indicative of what is to come: “Fun meeting with Stanford’s president today. Perhaps more courses will come online in the near future.” “Who here would love to get a CS Master’s degree online, if it is of Stanford quality and only costs $2000 in tuition? Please reply.”

2. Knowhow is being gained about:

As an aside, the AI course is characterised by what I would describe as quirky production values, which are anything but slick – students seem not to be put off by this – and which create for the learner a very uncanny sense of receiving personal tuition. Here for example is the AI course’s 210 second explanation of Bayes’ Rule:

3. An understanding can be gained about how the effort of volunteers can be marshalled in tasks like translation. In the case of the AI course, over 2000 people volunteered as translators, and the course videos are now captioned in 18 languages. Volunteering might need incentivising by fee remission if a course is not free. Alongside this there will be scope to gain a better understanding of how informal peer support structures and processes can develop outside the formal organisation of a traditionally structured course of this kind, and the extent if any to which a course provider needs to take steps to “seed” peer support. In the case of the AI course there is a burgeoning substructure of informal discussion about and peer support for the course “out there” on the Internet. Some of this peer support is of very high quality; and it can be found on several different channels – including Reddit, Google Groups, and Google Plus – none of which have been organised by the course providers. Here, for example, is a link to a learner’s notes from the course unit on Machine Learning.

4. A mass of data is being collected about, for example:

Such data, especially when analysed by the kinds of people whose technical specialisms are machine learning (Thrun) and artificial intelligence (Norvig) should support R&D into automating the provision of personalised formative feedback, and personalising the provision of the instructional content itself.

In 2008 the American National Academy of Engineering chose Advance Personalised Learning (alongside, for example, Provide Energy from Fusion) as one of 14 “grand engineering challenges” for the next 10-15 years. This is an indication that contrary to the glib and unpersuasive way the term personalisation has been used in British discourse about technology in learning: personalisation is going to be hard. Perhaps solving it will involve the kind of big data that the Stanford experiment will generate, and the minds of those involved in it.

I have been intensely interested in online distance learning for nearly half my working life, ever since (in pre-Web days) I had the luck to be responsible for the UK end of a Danish-led project involving the TUC and its Danish and Swedish counterparts to devise and run online courses for trade union representatives. That experience taught me enough to get deeply involved in online distance learning courses such as The South Yorkshire FE Consortium’s Learning to Teach On-Line course (LeTTOL), and The Sheffield College’s online GCSE English Course. Central to these courses (and to many other similar online distance courses) is the active and costly involvement of teachers, in day-to-day interaction with students.

The three mass courses offered by Stanford are, by definition, far too large in scale for there to be anything other than superficial interaction between students and teachers. But, if the AI course is anything to go by, what Stanford University has solved, with its short quirky and quiz-laden videos, is a way to give learners the feeling that they are receiving personal tuition, with plenty of scope alongside this for peer interaction.

There are many ways in which the AI course could be improved, but the underlying model feels right; what is more, it feels replicable for different academic levels and for different disciplines. But whereas Stanford can use its reputation (and its first mover advantage?) to bring together large enough numbers of learners to make courses such as this feasible, for all but a few providers the only way to get the numbers will be to collaborate. In the current climate of competition how will such collaboration be achieved? Without it there is every likelihood that individual providers will be too small to succeed.