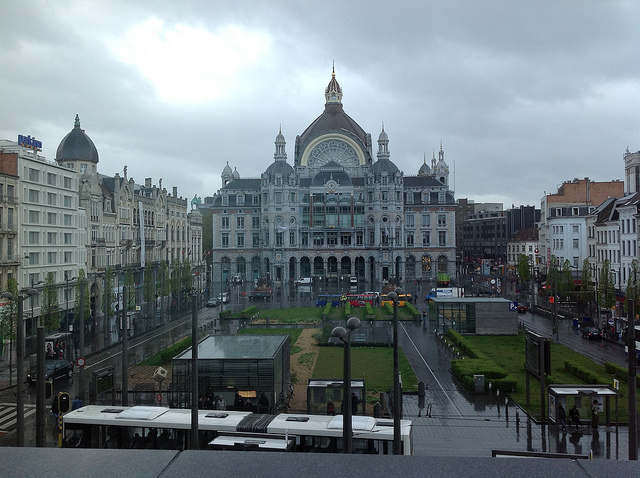 The Blackboard Teaching and Learning conference brings together like-minded people from across the UK and Europe, allowing for valuable conversations otherwise not had. Focusing specifically on the Blackboard range of products the conference allows attendees to really get down to the nitty gritty of how the tools work – and increasingly, how they integrate with the wider world of the web. This was the largest European conference for Blackboard so far, attended by over 250 delegates. As always at these events, the offline conversations were at least as valuable as the presented sessions, but it also provided a great opportunity for us to have some face to face time with Blackboard representatives to find out what they’re up to, and what Blackboard is planning for the future.

The conference was held at Plantijn Hogeschool in Antwerp, Belgium, maintaining the Blackboard tradition of alternating between UK and European locations. The city of diamonds and champagne was not looking its best, due to excessive roadworks and questionable weather, but the conference itself had a real sense of positivity, both from Blackboard and from the attendees. With the majority of clients over the ‘hump’ of the version 9 upgrade, the consensus seemed to be that the Blackboard platform is stable and less buggy, allowing its users (and admins!) to actually start getting excited about some of the great new features coming up. The positive vibe was started off with an inspiring keynote from Dr. Cor N. A. Molenaar, who reminded us about the reasons we do what we do – the pace of change, student expectation and the way in which ideas forming ‘the future’ of the digital marketplace are very much in the present.

The big Blackboard news of recent months was quite lightly handled by Ray Henderson in his keynote. The acquisition of Moodlerooms and NetSpot will form the foundation for the new Blackboard Education Open Source Services, and the contribution of Blackboard expertise to this community could be considerable, although it’s still unclear how the commercial / open source balance will be handled in practice. The proposed model seems to be a pick and mix one, where you could have Moodle as your VLE, but add in any of the Blackboard tools to it, including hosting, support services, and specific toolsets like Collaborate. This would certainly allow for greater choice, and importantly there was also reassurance that Blackboard Learn remains the flagship product and that the acquisition would not impact negatively on the development of the core VLE.

Blackboard also showed the now customary ‘report card’, again indicating improvements in their response times for support calls logged by users. As always though, there was less information on how they arrive at the statistics, and perhaps room to debate whether fast closure of support cases is equivalent to fast solutions to support issues…

In terms of Blackboard product development, service packs 8 and 10 are definitely creating anticipation. Service Pack 8, already live, provides a long awaited refresh of the Learn interface, and is very much aimed at improving elements of the core product rather than introducing big new features. There are improvements to navigation between courses, to assessment tools (the introduction of negative marking, for instance), and to activity reporting, as well as the introduction of standards alignment (the ability to allocate a learning outcome to a piece of content or assessment), devolved permissions for users and tools (known as ‘institutional hierarchies’) and a new authentication framework for Shibboleth and Central Authentication Service (CAS).

Service Pack 10, still tentatively scheduled for later this year, will bring the new text box editor – a small change that will make a big difference in terms of user support, improving the handling of text pasted from Word as well as embed code from other sources. It will also bring a much more student-focused experience with the introduction of ‘My Blackboard’, allowing students to create their own profiles, connections and social learning spaces. There was also talk of future enhancements to the calendar tool, another long-awaited improvement. A lot of the new features are leaning, quite rightly, towards providing the tools to enhance pedagogical focus and improve workflows for users, rather than technical capability of the product.

It is also a great time to be a Blackboard Mobile client, as Kayvon Beykpour (General Manager, Blackboard Mobile) announced the release of a range of new tools for Mobile Learn, in addition to those announced for Mobile Central earlier this year. Mobile users have seen the addition of campus tours, augmented reality and now push notifications and also mobile assessment in the last six months, and all for no additional cost – the combination of fast, responsive development and cutting edge tech is making the Blackboard product a serious contender in the institutional app market.

As well as the sessions from Blackboard representatives, there were many parallel sessions run over the two days presented by colleagues from other institutions. Assessment is still a big theme, with a number of institutions sharing their approaches to online submission and grading. It was interesting to note that there was little or no mention of Blackboard’s own plagiarism detection tool, with institutions speaking instead about the integration of Turnitin. Online assessment still seems to be a challenge in terms of workflow though; many of the presentations referred to customisations (everything from policies and processes to actual building blocks) rather than celebrating a product that ‘just works’.

Mobile was another big theme, and it was interesting to see how other institutions have customised their mobile app offerings in different ways based on user research. There were also some strong use cases presented for the Blackboard Connect (previously txttools) SMS tool. In addition to this, there was good advice from peers on key issues familiar to all of us – migration/upgrades and change management; digital literacy, transition support, use of video and VLE benchmarking, to name a few.

The number of exhibitors seemed less than previous years, with stands from a few Blackboard sponsors and partners overshadowed by a literal wall of Blackboard publicity, covering all of their various products advertised (Learn, Mobile, Collaborate, Connect, Analytics, etc.). Helpfully, representatives from each team were on hand to answer product-specific questions. Partners in attendance included Kaltura, Panopto and eXplorance, although former conference regulars Learning Objects were conspicuous by their absence.

Surprisingly, Twitter did not seem to play as large a part in the proceedings as we would have expected, in fact the twitter channels were noticeably quieter than at last year’s event. There was some confusion throughout the conference over which hashtag was the official one though, which may have contributed to this. Both #bbtlc12 and #bbtlc2012 were used (the latter being the official one).

All in all this was a really useful event, and the European location certainly allows attendees to broaden their networks and share expertise with a wider range of peers. That said, Antwerp itself is not the easiest place to reach, and we must confess to looking forward to the convenience of a central UK location next year!