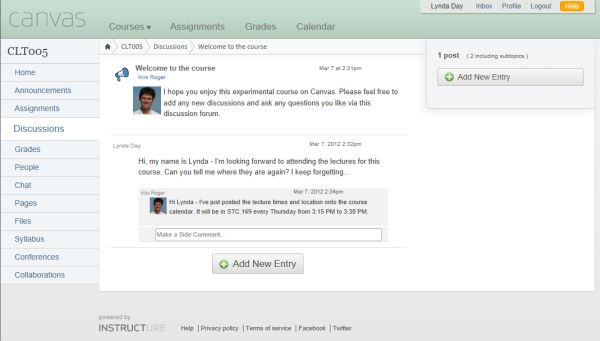 With Blackboard’s announcement of the takeover of Moodlerooms and NetSpot earlier this year the VLE/LMS market is clearly undergoing a fair amount of change after a few years of relative inactivity. I originally wrote this piece for the M25-LT ALT Regional Interest Group reflecting on new possibilities and opportunities for teachers to use free cloud-based course management systems instead of institutional VLEs/LMS. I also wanted to consider the non-financial costs and risks involved.

I’ve used the term LMS (Learning Management System) in the more general sense as it might be used in the US – to cover both ‘teaching’ and ‘training’ related systems. While Blackboard is the leading paid-for LMS provider, there are already a few free LMS or VLE (Virtual Learning Environment) systems out there, e.g. Moodle, but the key difference is that the new breed of free cloud LMS are externally hosted while still completely free to the teacher – similar to other free or ‘freemium’ cloud-based applications such as Google Docs or WordPress.

Another key difference, compared to established LMS solutions, is that an individual teacher can sign up and set up a course area in no time at all, as both are designed to be very quick and easy to use. Obviously, it still takes the same amount of time and effort to create your content and learning activities.

Coursekit (recently renamed ‘Lore’) and Instructure Canvas, launched in 2011, are the two cloud-based education apps that I have seen that most closely resemble an institutional VLE. According to at least one blog article written at the time both were in some way created as a reaction to a distinct student dislike of using Blackboard. You only need to check the comments on these articles for confirmation that this dislike is still fairly commonplace.

“Canvas is awesome! I’m at a university where the official LMS is Blackboard (horrible!) but several of my professors have recently had us use Canvas. It’s vastly superior to Blackboard, I really like it.”

Comment by Joshua Lyman on “Instructure Launches To Root Blackboard Out Of Universities“, Techcrunch.com

“I’m a student and my university uses blackboard as its LMS. Let me tell you, it’s one of the worst platforms I have ever used…I also have a terrible time using it. It’s very counter intuitive and I usually end up spending more time finding what I need for an assignment than the actual assignment itself…Remember, people don’t know what they want until you tell them what they want, and maybe it’s time to tell them to try something new.”

Comment by Allan Yu on “The Ingenious Business Model Behind Coursekit, A Tumblr For Higher Education“, Fastcompany.com

Why would a teacher use a free cloud LMS platform?

One of the key strengths of these systems is their simplicity. They are generally limited to providing file resources, a list of books/readings, assignments and calendar and a platform for internal course communication.

“We wanted to create a simple, elegant LMS that covers 95% of instructors’ needs… Blackboard covers 100%– that’s why it’s such a cluttered platform.”

Communication is primarily in the form of a message board more like a Facebook feed than a traditional Blackboard/Moodle style web discussion board. Although VLEs have often had communication at their core, there is definitely something attractive about the way that communication is presented in these examples of LMS – especially CourseKit/Lore. The creators have recognised the ubiquity of social media such as Twitter and Facebook and taken this to the heart of their product.

Most of the risks are related to the possibility that teachers will vote with their feet and set up their own course areas independent of any institutional VLE. Many risks are common with the use of any cloud-based application:

Additionally, there is a risk of confusion for students who will potentially have to use different VLEs/LMS for different courses and the loss of the opportunity to link the core course delivery platform to other systems in an institution. And what happens when the single member of staff that is the owner of a course on one of these platforms leaves their institution or is unfortunate enough to not be in a state to hand over the course to somebody else?

How can they be free?

Lore address this question directly in their FAQs – essentially they believe there is inherent value in their user base that will be monetised at some later date. Canvas operates a freemium model where individual teachers can use the platform at no cost and has a chargeable Premium option for institutions. They can only be hoping that enough teachers signup at any one institution to make this a viable option.

With any free to use application there must always be the unspoken possibility that at some stage advertising may be introduced – which could constitute another risk as the teacher is unlikely to have control over the type of advertising, plus the advertising will only serve to distract the students from their learning!

Can we or should we as learning technologists dissuade or even prevent the use of these ‘additional’ VLE options, especially when, in many cases, we promote the use of other cloud apps for teaching and learning. Are teachers just likely to go ahead and use them anyway?

Some (e.g. Mark Stiles) have for quite a while been contemplating ‘the death of the VLE’ – contending that the core functions of the VLE will be in time just be another tool in the cloud combined with other more obvious cloud-based applications. Could this be an open source streamlined/slimmed down VLE where only the hosting is paid for i.e. a hosted ‘streamlined’ Moodle or something like OpenClass (by Pearson)? Is this a step in that direction? On the face of it Blackboard clearly see there is a business future in cloud hosted VLEs/LMS, but their view appears to still focus on the institutionally managed and operated environment.