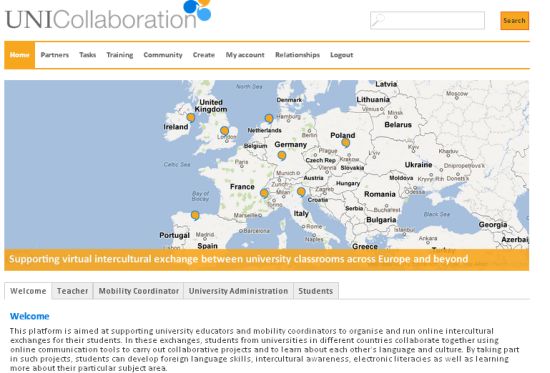 Foreign language telecollaboration or Online Intercultural Exchange (OIE) engages groups of foreign language learners in virtual intercultural interaction and exchange with partner classes in geographically distant locations. These exchanges most often involve bilateral projects between classes in two different countries, each learning the other’s language. However, they can also include more complex, multilateral projects involving language learners from many different countries working together online using a lingua franca such as English as a means of communication. For example, classes of Business studies in Israel, England and Germany, can now work together on projects using English as a lingua franca using a shared workspace such as a wiki or a NING.

Whilst primary and secondary school teachers interested in running OIE projects have been supported for many years by major networks and virtual platforms such as ePals and the European Union’s Etwinning platform, telecollaboration has received little support in university contexts to date. However, in October 2011 the INTENT group (Integrating Telecollaborative Networks into Foreign Language Higher Education) was awarded funding by the European Commission’s Lifelong Learning programme[i] to carry out a 30-month project. The aim of the project is to raise awareness of the advantages of telecollaboration as a tool for virtual mobility in foreign language education among students, educators, student mobility coordinators and (senior) managers at university level.

We believe that telecollaborative projects offer many advantages to a wide range of different stakeholders in Higher Education. Telecollaboration can be an effective tool in the development of students’ foreign language skills, as well as their intercultural competence and other transferrable skills. It is also an excellent form of preparation for physical mobility and is a viable alternative for those students who cannot participate in physical mobility programmes for personal or financial reasons. It can also form an important part of an institution’s internationalization at home policy.

The INTENT project started with a survey to gain a representative overview of telecollaborative practice amongst European universities. The survey identified the characteristics of telecollaborative practices currently undertaken by European university educators and explored the barriers which practitioners encounter when organising online intercultural exchanges. The project team also gathered the views and opinions of European students with different OIE experiences, with regard to the impact that participating in online exchange has had on them. In the second part of the study, the project team collected various case studies of universities, partnerships and telecollaborative networks which would provide a representative, qualitative picture of the type of online intercultural exchanges which are being carried out around Europe. Some of the most interesting findings included the following:

To achieve greater awareness of telecollaboration around the academic world, the INTENT team are now developing a platform – www.uni-collaboration.eu – where educators and mobility coordinators can join and find everything they need to learn about and set up telecollaborative exchanges. The platform includes a partner-finding tool, a task databank, assessment portfolios and training materials. It is hoped that it will be a useful hub for experienced telecollaborators as well as for novices who are interested in learning how to run exchanges, finding partners etc. The platform will be officially launched in February 2013.

During 2013 we will also be holding training workshops in universities around Europe.

These workshops are aimed at university teachers, mobility coordinators as well as management who are interested in learning how to integrate online intercultural exchange projects in their institutions. Registration is free but participants will have to cover all their own travel and maintenance costs.

Details about the workshops:

To read our full report on telecollaboration in European universities or to find out more information about our project, visit our news site or email the INTENT project.

In early 2014 the project will close by holding a major international conference at the University of León, Spain on the theme of telecollaboration at university level.

[i] This project has been funded with support from the European Commission. This article reflects the views only of the authors, and the Commission cannot be held responsible for any use which may be made of the information contained therein.