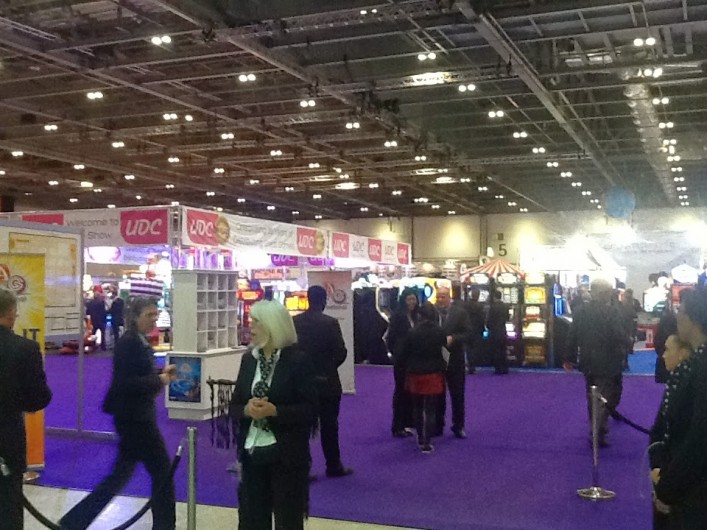 There is a curious juxtaposition this year – opposite BETT is an exhibition by companies selling fairground equipment and gaming machines to lure in young people and inside BETT….

An illuminating day, Mr Gove rightly talked up the strengths in the UK education system and some of the companies doing a lot of exporting . One that was new to me was littlebridge.com now with over 5 million global English learners .

I took a lot of notes about what he then said about ICT in the classroom and the new English computing curriculum – it did not square with the debates I have been following and I think this TES piece probably captures this better than I could express as an outsider. Still I am interested in harnessing and harvesting any resources that come out of this for computing teachers in Scotland . He did mention open education as the way ahead but then used as his example MOOCs aimed at school pupils notably the Raspberry PI OCR partnership putting GCSE materials on-line.

Highlighted too that Cambridge University are about to launch a transitional maths mooc for school pupils heading towards Maths or Engineering at University.

I then contributed to a lively debate with peers on the Miranda Net Programme. A view from the audience here.

I think it shows that higher education folks are still not sure how to react to open learning – I think they still hope it is a passing fad rather than something that allows them simply to reach more learners and help them.

Next I was another talking head being interviewed for the European Open Education Challenge. Seed funding for start ups in and around learning . I was asked “The how is learning , assessment and certification going to change over the next few years question” . Look forward to seeing this and seeing if I made any sense

Ended day with meetings with some of our long term commercial partners and a quick hello to Microsoft and some other folks I’ll be meeting later in week. Spotted too a few well known Scotsmen on the make but acting independently. We really should have a Scottish stand at Bett, Korea have one this year. Had a chance to mourn passing of BECTA with some old colleagues – certainly feels that schools could do with more independent advice on IT procurements – lot of very slick sales people here. Not even sure who is capturing good practice on classroom use of new things down here – but perhaps that is just passe – as a thousand flowers bloom.

You can see why role of membership organisations like naace and ALT and of course MirandaNett are important places for folks to share…but can’t help thinking there should be a bit more leadership here. Would help the exporters too.

Now frazzled – glad I was not at #Bettawards this year but looking forward to finding out who won what.

Seems strange to be almost queuing up to get in at 10am.

Meeting with Microsoft  partners – we are not doing all and getting all we could out of Partners in Learning , Kodu Cup , Global Forum and making the best use of the few innovative educator experts we have in Scotland.

Was great to catch up with Stuart Ball on a high from winning BETT Award for Kodu Game Lab in UK . Hope we have now mapped out how to push this along . He gave me a few new contacts in Microsoft UK to help with this.

Then meeting with Alison Drever  from Education Scotland, so much happening and enormous potential in computing area. It is great that there is once more Education Scotland expert practitioner in this space and a real willingness to pull our collective assets together.

Then in quick succession met Ollie Bray , Doug Belshaw and Jaye Richards – all presenting at #Bett2014.
(Gosh do you only meet people with Blogs at Bett?)

Headed back to Westminster for twilight session on new models of assessment with Collaborative Assessment Alliance . Some great ideas and met some old friends .

A lot of discussion around how technology is being used in different ways for assessment.

The technology for  pretty individualised assessment is already with us  but so much has to change around mind sets.  Some great examples of peer assessment around things like e-portfolios.

Finally met up with some pioneers of virtual worlds and online simulations and realising at this point I had skipped lunch had a late dinner in Covent Garden, picked  up some great business ideas too.

Starting to get exhibition area crazy and to this point I have only been criss crossing the space for meetings but  I had a wander around finally.

Lots of on-line toll gated learning content, lots of international stands,  more I think than in past years, but while I enjoyed watching some sessions on practise nothing really jumping out . This more about things I see over year – for many there may have been some new stuff.

A lot of stands have all kinds of ways to lock down , store securely , charge, manage apps across class sets of tablets or laptops . I know these things are expensive assets but I am still not sure why we are not thinking of keeping these in learners hands more. I think we’re missing the point somewhere here.

Also a fixation on capturing and analysing big data. It seems the natural adjunct to on-line evidence and assessment and perhaps heralds the way for more diagnostic and learner directed assessment.  I worry that a lot of this collection  is for its own sake .  Just because it can generate lots of data does not mean something has any impact at all on learning.

A special mention to the Scottish company earning plaudits around world for their flexible filtering system for schools. Though I like my learning unfiltered (!), I do appreciate the need for this in primary schools

This Brazilian company looks really interesting check out the English version of the site – with 5 million users. Philosophy and technology all look very sound.

Microsoft, with new range of devices, windows 8  getting better and 365 for education, really seem to have stepped up to the mark.

Managed to miss Skills Minister Matthew Hancock’s speech which deserves a read…already impressed by the work of FELTAG in England...looks like more will come of this with Stephen Heppell at the head of things. I think some of this shows that the spin doctors picked up the reaction to Michael Gove’s opening address – perhaps this was the antidote.

Had a great lunch time meeting with Greg Butler and hope we can get Scotland to join the Collaborative Assessment Alliance.

Final round of meetings with some customers, Jim Fanning of Education Scotland and some folks who had picked up conversation on twitter.

Another case I think for having some Scottish stand or a more formal gathering,  it would have been great to reflect on some more of these things with peers and share notes.

Know too there were a few more folks I could and should have said hello to. Sorry, never enough time.

Then run for the airport.

This post was originally published on http://www.joewilsons.net/ and is re-posted here with the author’s permission.