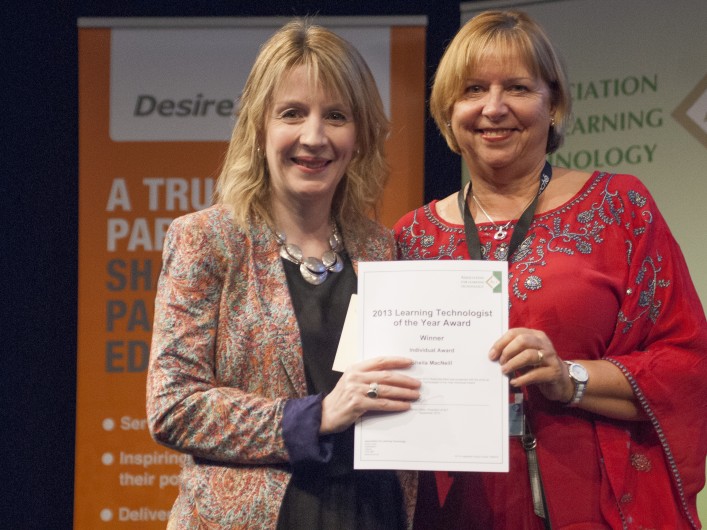 ALT Learning Technologist of the Year: I’ve looked at things from both sides now

Sheila MacNeill is a Senior Lecturer at Glasgow Caledonian University and the 2013 winner in the individual category of the Learning Technologist of the Year award.

One of the highlights of last year for me was winning ALT’s individual Learning Technologist of the Year Award. As a winner I’ve also been part of the judging panel for this year’s awards. In this post I’m going to try and share some of my thoughts from both sides of the competition fence.

Martin Weller has recently written a blog post about awards in which he captures how many, myself included, feel about awards:

But as Martin acknowledges, after winning an award things do change. He then goes on to highlights some of the benefits of winning awards.

“1)They act as a shortcut – instead of explaining why something/someone is doing a good job you can just say ‘award-winning’.

2) It helps – we have researchers on the project and this may help get further funding to keep them, or enable them to get other jobs. Being sniffy about awards seems churlish then.

3) It felt nice – it’s not all about the altruism I’ll admit, it felt kinda nice to be given an award, even if I couldn’t be there to collect it.”

Never having really won anything in my life, I was totally thrilled to win the ALT award. Not least due to the fact that it was recognition from my peers. The timing was almost perfect for me too as it coincided with a major change in my career. It was a really lovely bookend to my time working at Cetis. It also helped when I was starting in my new job as it was something quite impressive to put in my staff bio. I now also have something in the awards section in LinkedIn, which previously I never really understood the point of :-)

Winning is one thing, but as they say, “you’ve go to be in it to win it”.  Entering competitions is daunting and time consuming. One of the reasons I really enjoy working in the learning technology community is the lovely people in it. Those I most admire tend to be the most modest about their achievements and contributions. However this is not a good thing when it comes to entering the ALT Learning Technologist of the Year Award.  This is where you really need to forget modesty and take the opportunity to share and celebrate your achievements. At this point I should need to confess that I didn’t actually write my own entry. My colleagues Lorna Campbell and Christina Smart conspired, took the time to fill out the form, and then told me when they had sent off the entry form. That gesture in itself meant a huge amount to me too.

Being part of this year’s judging panel has given me another perspective on the awards and the selection process.  After an initial sifting to ensure entries meet all the entry requirements, the completed written entries are judged using a relatively simple but clear marking process. The top scoring entries from that process are then invited to an interview, where they are asked to do a short presentation and then answer some set questions, which are again scored by all the judges. Once all the shortlisted entries have been seen, the decisions are made about the winners.

After a very long but very enjoyable day going through this process recently I have some tips for those of you who maybe think about entering but never get round to it.

You never know, you too could have blue paper signs left in your wake!