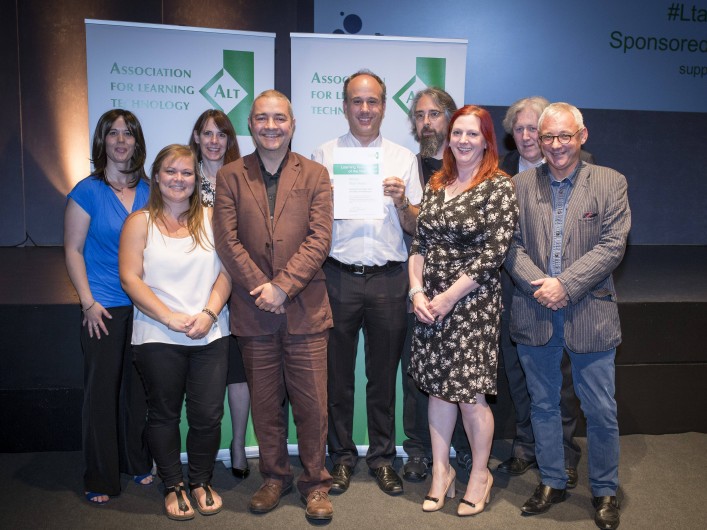 The LearnTech team at altc 2014

The Northampton LearnTech Team are winners in the team category of the 2014 ALT Learning Technologist of the Year Award.

On Tuesday 2nd September, 2014 at the Association of Learning Technology gala dinner, the Northampton LearnTech team won the award for “Team of the Year 2014″.

The Award’s overall purpose is to celebrate and reward excellent practice and outstanding achievement in the learning technology field and is open to individuals and teams based anywhere in the world.

This award recognised the incredible work and progress made by the team over the past few years and the contribution which they have made to the environment within Northampton in addition to advancing the Learning Technology field more generally.

As part of the application process a group of key staff with in the University of Northampton had to talk about the impact which the team had made on their own particular area. In addition, the team have also had to make a film about the work which they do:

In accepting the award, Rob Howe (Head of Learning Technology) stated that:

“Northampton’s Learning Technology Team is a major force for positive change within the University, its academic partners and the sector. Its institutional role far exceeds supporting colleagues in the use of learning technology: the team fulfils an enabling role, critical to capacity building and scaling up Northampton’s excellent provision. It collaborates with academics and course teams to identify pedagogic needs that appropriate learning technologies can help them address. Through such collaborations, the team embarks on transformational projects leading to innovative and successful experiences across different disciplines and modes of study, as well as research outputs. This is a great achievement not only for the LearnTech team and for Library and Learning Services, but also for the University as a whole.”

Republished with permission from blogs.northampton.ac.uk/learntech