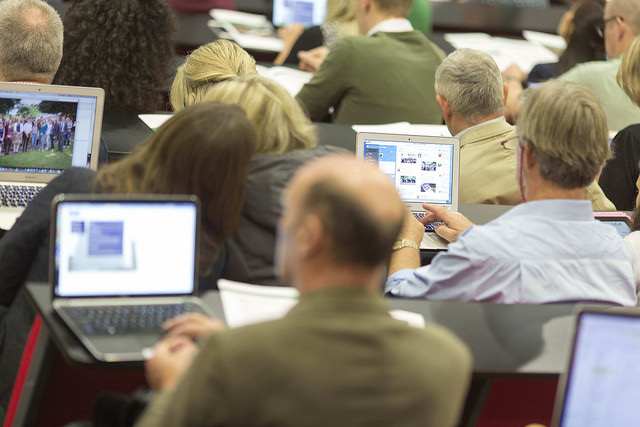 Recently Sue Watling from Hull University asked the ALT-MEMBERS mailing list for advice on developing a policy document on the use of social media which in particular addresses misuse:

I was wondering if anyone had any suggestions for dealing with misuse of social media, for example students using anonymous apps (like yikyak) for inappropriate behaviour likely to cause distress to others, both staff and students

Sue has followed her original post with a post compiling responses to her original question. As this is an area that may be of wider interest to the community, and with Sue’s permission, we’ve reposted an edited version of her compiled list:

This was the Social Media for Learning in Higher Education Conference #SocMedHE15 organised by Sue Beckingham, Helen Rodger, Alison Purvis and Andrew Middleton.  If you weren’t there in person you can see a recording of Eric Stoller’s keynote and read abstracts on the conference programme. Follow @SocMedHE for updates.

There were a number of recommendations for the set of leaflets on responsible use of social media with students from Sheffield Hallam. There are currently five leaflets:

These leaflets are a great resource, in particular, highlighting to students the value of using and having a social media profile to enhance employability. A number of these leaflets are also available for reuse under a Creative Commons CC-BY-NC-SA licence. These leaflets were developed by Sue Beckingham and the the team at Sheffield Hallam, Sue is also one of the current organisers of #LTHEchat

Sue Beckingham confirmed Dr Bex Lewis will guest lead a #LTHEchat on ‘Managing negative use of social media and cyberbullying’ – not until April as the programme is so booked up – but maybe worth putting in diaries. #LTHEchats take place every Wednesday 8-9pmGMT. For more information visit the LTHEchat website.

These Jisc resources were suggested:

In terms of apps like Yik Yak that tend to be hotspots for controversial content, I know that universities in the U.S. have included the app as part of student conduct guides…as in, if you post something that violates the campus code of conduct (and you’re discovered to be the poster), you’ll be sanctioned in the same way as you would if you sent something via email, text, Facebook, etc:

It’s going to be interesting to see if Yik Yak on the web (still in beta) will result in enhanced “listening” efforts by universities to capture harassing posts for future sanctions:

I know of some institutions in the U.S. that have students sign an agreement (usually as part of a computing / network access policy) saying that they understand the code of “digital” conduct and that they are aware that if they violate said agreement, that they will be subject to consequences.

Others suggested Eric Stoller’s paper Social Media Questions and Answers. This article again touches on use of Yik Yak by students but also includes Eric’s response to a wider set of questions about social media and technology in education.

There was general advice about the rules about harassment and good conduct which should apply to social media in the same way they do in the physical space along with emphasising the positive use of social media and then mentioning misuse, an example being the ANU guideline “Social media participation by ANU students“. These guidelines are short and concise and the page also contains a link to similar guidelines for staff.

Another example offered is from the University of Bedfordshire. Go to http://www.beds.ac.uk/search/external-document-search-page and search for “social media”. Or see this Use of Social Media in Teaching & Learning Policy document for staff and students.

There were a few comments from other people having issues with Yik Yak; suggesting it does not seem isolated to any one institution or cohort. There were also suggestions for referring to relevant professional body’s policies for professional behaviour.

Another resource released recently is the UCISA Social Media Toolkit: a practical guide practical guide to achieving benefits and managing risks. This toolkit usefully highlights the benefits of social media in education, even more example strategies and policies, legal issues as well as dealing with things when they go wrong.

Lastly, the OU has a computing code of conduct and within that is the use of social media. If the code is broken or abused it can lead to a student disciplinary.