In memory of Hans Rosling 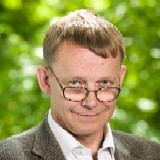 Many people will have been sad and shocked that Hans Rosling “a kind and constantly curious genius” died on 7 February, aged 68, from pancreatic cancer, in Uppsala, Sweden.

Rosling was professor of international health at Stockholm’s Karolinska Institute. In 2008 he gave a brilliant and memorable keynote – A fact based world view – at the ALT conference – “Rethinking the digital divide”. 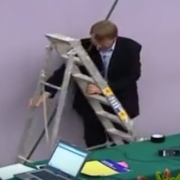 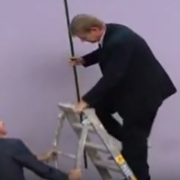 We were lucky to be able to book Rosling soon after he and his son and daughter in law had set up the Gapminder Foundation, but before Rosling had become such a publically influential and visible figure.

Rosling was a joy to deal with as a speaker. Quick to reply to emails, flexible about dates, utterly undemanding. Insistent that the small honorarium that ALT paid to keynote speakers at that time went to the Gapminder Foundation.

On the day of the keynote I had arranged to meet Rosling in the foyer of the big lecture theatre, around an hour before he was due to speak. He strode in. “Did you find us OK?” “Of course. Some years ago I was a Swedish orienteering champion, so it was not problem.” We moved into the theatre. Hans surveyed the set-up, noticing that the base of the screen in there is perhaps 4m above ground level.

“I need you to get me the longest pointing stick that this place can provide. And a stepladder.”

One of the great things about organising a conference at Leeds University is the responsiveness of the support staff. Within minutes a big aluminium stepladder and a very long pointer had been found.

I steadied the ladder whilst Rosling did a couple of practice runs up it, holding the pole. Satisfied, we folded and hid the ladder behind the cloth-draped speaker’s tables, and then turned our attention to getting Rosling’s presentation set up, and his radio microphone fitted.

A little later a Leeds University manager appeared. “Can I have a word with you? I’m afraid that the university is not happy for your speaker to use the stepladder. We think it is unsafe.” What to do?

I had some ALT headed notepaper in my bag. I discussed the situation with Rosling and we decided to produce a disclaimer. Here it is. 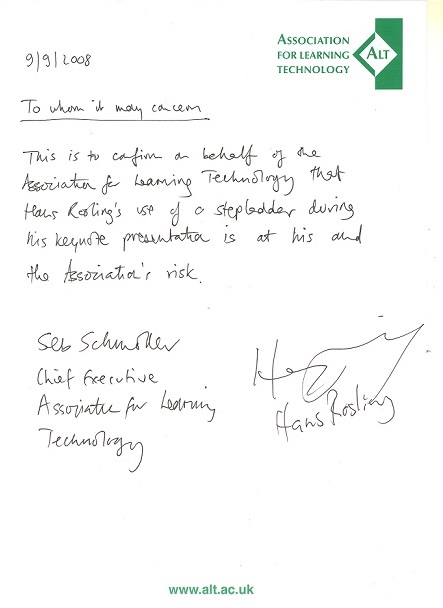 We gave the disclaimer to the man from the university. He departed, somewhat happier. People started arriving for the session. Rosling’s keynote was terrific: uplifting, ground-breaking, athletic, funny, political, and with learning technology references woven in.

Since 2008 I’ve looked out for Rosling’s work. For me, his most powerful and affecting piece, though there are many others, is this small video from 2015 – Why boat refugees don’t fly. Please also find time to read this excellent obituary by Ann Lindstrand, who is head of the vaccine and register unit, at the Swedish Public Health Agency, and this blog post by Oxford economist Max Roser in the British Medical Journal.

If you want to donate to UNICEF in honour of Hans Rosling, here is the page for this purpose created by Agneta Rosling.