A 10 Year EdTech Journey with ALT

Ten years ago I became the first elearning developer to be solely located within a school environment in my institution. Whilst not as impressive as ALTs 25 year anniversary this milestone has meant I have been looking back over the decade. This reflection made me realise just how much ALT has been a significant and integral element of my professional growth across the years.

As the role was completely new I had a blank slate to work with, only inheriting a single project, the rest was up to me which was simultaneously liberating and daunting and I did feel a bit isolated working in a team of one. The first year flew by finding my feet in a large school where many of the teachers worked outside the institution in clinical environments, but a search through my email archive shows that one of the first things I did was sign up to a ALT-C jiscmail forum.

The following year I registered for ALT-C 2009. I had no idea what to expect but was surprised by the scale of the event and by the variety of sessions going on across the conference. I clearly remember many of the presentations, including those from Martin Bean, Diana Laurillard, Jon Drori and especially Michael Wesch as I was particularly interested in his work on digital ethnography. Recently as part of my distance learning course I actually conducted the world’s smallest instance of digital ethnography and revisited many resources by Michael further deepening my interest in ethnography. Re-listening to these talks while I write this transports me back to Manchester and so much of the content seems just as relevant almost a decade later. This brings home how big an impact being in the room makes to memory, I can’t believe how much of the individual talks I vividly remember. 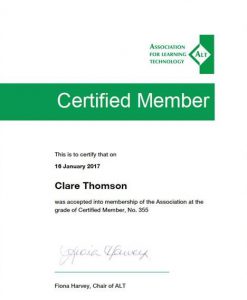 Another significant outcome of this conference was discovering CMALT. This stood out for me as the first thing that was specifically for me as an elearning professional to both recognise my work and contribute to my professional development. Even though the spark was ignited in Manchester it turned out to be quite a long journey. Returning to work and working through the guidance, enrolling on a couple of webinars, I managed to talk myself into a self-fulfilling cycle of procrastination. I convinced myself that I needed to achieve more before starting and kept this up for several years, too many years. However, by 2016 I needed a shake and started to blog about my frustrations: [CMALT is driving me crazy] – the connections I made on Twitter over what turned out to be a series of posts provided the impetus needed and I submitted my portfolio just over a year later. I was so proud to receive my certificate and badge at the beginning of 2017.

Of course this wasn’t the end of the journey as I immediately jumped in to volunteer an assessor. The advice and guidance the lead assessors gave me over the next few cycles and the work of those I assessed has been a rich seam of learning and well worth the time invested. I was also then able to map all this experience across to my Higher Education Academy Fellowship application thanks to the invaluable mapping document provided by ALT.

After Manchester, my work became increasingly busy with the biggest pressure point at the end of August/beginning of September, as the majority of medical students return to study in August, so sadly I have been unable to get to ALT-C since. However, livestreaming, recordings and Twitter conversations have been lifesavers and continue to keep me up to date with all things current in edtech.

In addition, open webinars, Twitter and associated blog posts by the Association all fed into my work and made me feel a part of a unique and diverse community, together with OER and the online winter conference. I have even presented virtually at the last two winter conferences which provided me with another learning opportunity to practice what I preach to my teaching colleagues, allowing me to provide advice based on experience as well as theory.

Over the years the number of learning technologists within the institution gradually grew and we established the ALT Northern Ireland Members Group. This work opened up new networking opportunities across the country and sectors and started conversations that would otherwise never have happened. We also had a virtual attendance of ALT-C 2017 for all those unable to go in person which made watching the live stream more interactive and inclusive than sitting alone at a desk. I continued to campaign for institutional membership and disseminating the benefits that I had gained from becoming firstly an individual member and then a CMALT member. Queen’s University joined in September 2017, closely followed by others across the country.

Over the ten years the conversations around learning technology have both changed and yet remained the same. We are still debating the worth of the virtual learning environment over open technologies, we still struggle to engage time poor teaching staff and students do not come to further and higher education magically knowing how to use technology for their learning. Yet, we have raised our critical voices in the face of shiny tech and increasing levels of surveillance and kept the open movement alive. ALTs work across all these areas ensures we are kept up to date and have the knowledge and research data to advocate for the appropriate use of technology for learning. 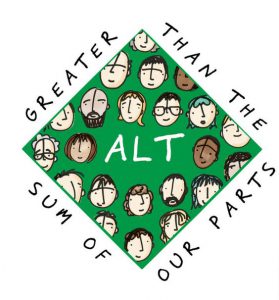 When I began my journey in medical education as an early career learning technologist almost one hundred percent of my time was spent building and creating. However, I have grown to become a manager, a researcher, a teacher, a mentor, a presenter, a quiet campaigner, an open education practitioner and a creativity advocate. All of these elements of my professional DNA are infused by ALT and the people who make it so successful; a constant supply of knowledge, support, confidence, connections and inspiration. The embodiment of “Greater than the sum of our parts”. Being a member of the association is a perfect conversation opener when meeting new colleagues, whether in my own institution or beyond, it has quite literally opened doors and formed bridges.

Looking to the future, I hope to complete my senior CMALT portfolio, one of the new proposed routes to accreditation. The Norther Ireland Members Group is planning to host another virtual attendance for ALT-C 2018, for those who want the face-to-face benefits of a conference but are unable to make it to Manchester. Most exciting of all, I am embarking on a new journey as a PhD student on top of my full time job and I know I will be calling on many ALT resources and connections for support and advice.

Finally, if none of this inspires you to become a member there is always the allure of stickers, pencils and badges; please come and join us you absolutely won’t regret it.

For ALT’s 25th Annual Conference we will bring together different critical perspectives in Learning Technology from across our community that will examine the challenges ahead and question the shape of things to come. For more details, visit the conference website https://altc.alt.ac.uk/2018/