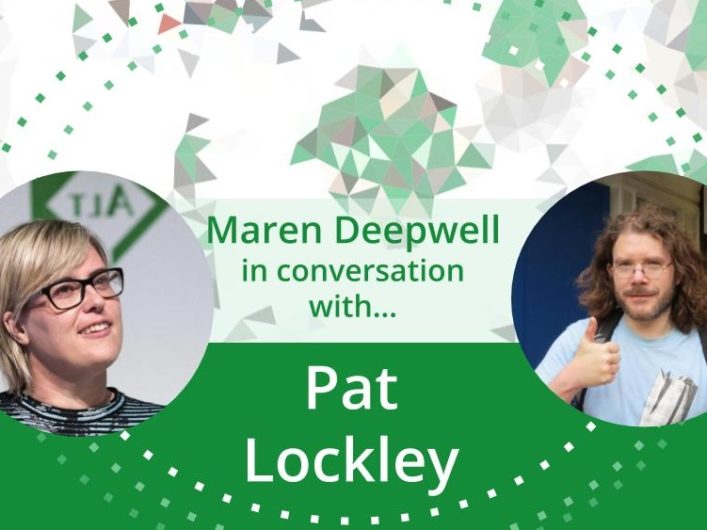 This time I am joined by Pat Lockley (@pgogy), Chief Pogoing Penguin, Pgogy Webstuff. Pat’s work has long inspired me and one of my favourite projects that Pat is involved in is the PressED Conference – a tweeting WordPress conference. So I am particularly excited to find out more about Pat’s work and what’s on his mind just now:

Maren: Tell us about what you are currently working on?

Pat: So I’m mostly working on a glaucoma disease progression and treatment model for Moorfields / UCL. I’ve only just finished a version of it, and the delay is largely down to the fact it’s hard to stop helping prevent blindness to answer questions.

How does an ALT member end up here – well, it started with working on various courses to help build capacity for ophthalmologists in West Africa. These courses happen on UCL’s Extend platform, and are available to various cohorts as part of a blended learning project with the online courses used as a prerequisite of a practical course in West Africa. So I started out making articulate content for them. I’ve seen a lot of sliced up eyeballs for my troubles…..

Bar that, I am working on a few WordPress sites (I pretty much am always doing this). Just finished migration the Sociological Review onto WordPress. Helping out with a UWE / Loughborough / Warwick project on storytelling and droughts with some visualisations. Helping a charity to develop a new theme, moving another charity to a new host. Just helped the Foundation Year Network to get more from their WordPress install. I work on a ridiculous number of projects at any one time. I am sure I’ve missed one.

I spend a lot of time in WordPress, and so I’m helping out the WordPress Governance Project – https://wpgovernance.com/ . The goal of the project is try to introduce a governance structure so people using and developing WordPress know how and what decisions are being made. Anyone who is interested can get involved in the project, so join in if you want to contribute.

Individually, though this may question the meaning of the word “work”, I am working on giving back to projects I use, perhaps not use, perhaps rely on. So as well as the governance project I help out with WP Campus Security Blog (https://wpcampus.org/category/security/). Which is a vital read if you’re using WordPress at all. WP Campus is worth a look too. It’s an awesome conference on using WordPress in Education – https://wpcampus.org/. They organised a fund to help sort out the accessibility issues in the new WordPress editor. Really important stuff.

Longer term, I’m working on building a WordPress security tool, an improvement on the neoliberal tyre fire that is openness, and a top secret project to help get rid of some of the barriers that mire almost every thing in elearning.

Maren: What influences your work?

Pat: Choice. There’s nothing more than I dread than saying no. That’s not through some acquiescent, submissive character trait but just the sense of admitting something isn’t possible saddens me. Perhaps there’s a terrier like never quit trait in me that just wants to get things done.  Do I believe there’s such a thing as a lost cause? No.

Before I got into elearning, I was in IT support. I spent a long time working out how to fix problems. It was a bit of a culture shock to suddenly have such big systems around me which I couldn’t change / or couldn’t be changed at all.

When writing code to make open source, it’s always on the back of your mind how others may use it. So you’ll see little side paths and short cuts all the time. An example of this is when me made the laws MOOC for the University of London. You can see some of the thinking behind it here – https://www.youtube.com/watch?v=uw6mmKtKduo. We tried to assume there was never one path everyone would take and built accordingly.

Pat: Oi Cat, Oi Dog, Oi Frog and Oi Duck-Billed Platypus. Three seminal elearning texts and not just what I read to my kids before they pretend to go to sleep. They all focus on the dangers of rules and taxonomies created by unquestionable, unelected dictators. Which is basically elearning naming conventions gone awry.

The last education book I read was Illich’s Deschooling Society, which introduced “false public goods” to me as a concept. I’ve found that a really useful tool to look at a lot of things.

Maren: How do you make your to-do lists.. analogue or digital or both?

Pat: Well, I tend to work on the basis that if it’s important I’ll remember it. I use trello a bit on projects, but I tend to spend a lot of time coming up with new cards and ideas so things tend to get cluttered. Once to-do lists become two dimensional things tend to get a bit weird.

I’m very stream of consciousness in most things, so I tend to not think to do, but instead just do.

Maren: On work travel, you are never without..?

Pat: Dongle, my almost classic car age Nissan Micra. I have my phone and laptop too, but sadly I’ve not named them yet.

Maren: Which learning technology makes the biggest difference to your work (and why)?

Pat: XAMPP (https://www.apachefriends.org/index.html). XAMPP is an easy way to get a web server onto your laptop. Once you’ve got a webserver, you can install WordPress, Moodle…. a fair lot of elearning tech. Using this you can really open up open source code and start to make changes and learn how things work.

Maren: Who are your learning technology heroes?

Pat: Back in the day, I had a band, and on myspace bands had to list their influences on their profile. My band has “who wants to be influenced anyways”. That’s very much my take on heroes. However, we live in a time of imposter syndrome and increased anxiety, so anyone one of you working at a public college or university, working to help people learn, working to help increased public knowledge, is a hero to me.

Someone asked me this question about 7 years ago. The person I named has sadly gone downhill so fast that I am loathe to name someone again in case I’m cursed. However, it might be that I see a lot of villains and not heroes. There are so many people out there who need to really stop and take some time considering their influence and being more careful with their words. There’s so much self-publicity masquerading as debate. Some silver tongues covering up brass necks.

You didn’t ask me to list the villains though. Shame eh

Oh, Natalie Lafferty’s bravery in doing the pressED (pressedconf.org) conference with me was somewhere beyond heroic.

Maren: If you had learning technology superpowers for a day, what would you change?

If you think that’s excessive, ask yourself if I’ve really made them harder to use and more inaccessible by placing them in a black holes at the edge of the universe?

To be immodest for one brief moment and paraphrase Bentham, but VLEs are no longer nonsense on stilts but nonsense on stilts on rollerskates. Calling them wobbly gives the false impression it was ever not wobbly.  It’s not even the fault of the VLE, it’s the fault of sending one tool to do a million jobs, and finding that masters of a trade beat jacks-of-all-trades. The single tool culture / approach / methodology is just a sunk-cost fallacy.

Giving people a choice of system brings overheads, but using a system which has an ability to be slightly more varied would be a good start and I suspect start to reduce time spent saying “no, it can’t do that”

Maren: What are your favourite hashtags?

#altc is also good, and you get to appear on one of those network diagrams Martin draws each morning. It must take him ages to do. He should be paid more.

Maren: What’s the best way for someone to learn more about what you do?

Pat: If you’ve got this far and you’re still interested, @pgogy on twitter or on facebook. At some I need to restart my blog. I do a lot of stuff no one knows about, and it makes sense to start sharing that.

Maren: Thanks for taking the time to join me, Pat, #altc!