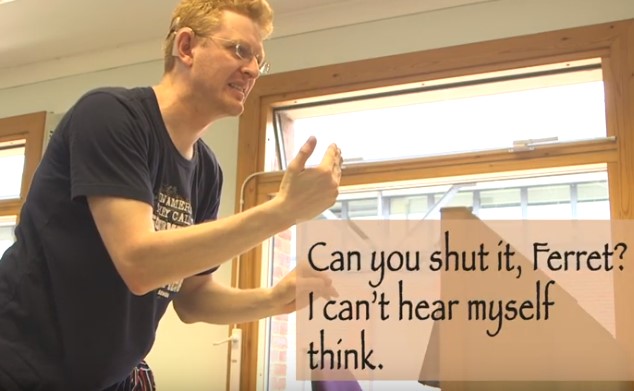 Employing a student intern to make a library video – What can go right (or awry)?

We employed an ARU student (Kate Laver, MA Film and Television Production) as an intern for an employability initiative and working closely with us she produced a promotional but educational video for the library. The 12-week, part-time internship was a fantastic opportunity for students either finishing or part way through a course to get practical experience of producing videos to a brief. Here I describe my perspective of working with Kate to produce the video.

In terms of influences, there are loads of videos out there that introduce libraries to new students, including walkabout tours, marketing videos and screencasts. Many are made by library staff, professional video production companies or created by students as part of their assessment. For us it was important to get an authentic voice because YouTubers (who are also students) like Ibz Mo can reveal more about study habits and library use than professionally produced videos. We also wanted something fun, engaging and memorable that would appeal to students who use social media and show a more humorous side to the library.  Other influences included TopekaLibrary’s parody of a Taylor Swift video,  BYU Library’s ‘Ask a Librarian’ and Fayetteville Free Library’s lib dub style.

Our video is called Ferret Grey’s Re-Searching for the Drop Bear which is shot in a spoof nature documentary style. In the video, a new student called Ferret Grey is looking for information on drop bears and Ferret looks everywhere, eventually finding out drop bears don’t exist. In the end he sees his Subject Librarian to get help and realises they were the drop bear he was looking for all along. By using narrative, we thought students could identify with Ferret plus it allows for subtle interactions which brings up surprises every time you watch the video.

By employing Kate as an intern, we established a good balance between her ideas and our brief. Our preference was that the video was a maximum of three minutes for optimum engagement viewing time and the video was to include the ‘three S’s’ of the library – Space, Support and Services. (We excluded Stuff because this video was aimed at new students from all faculties and we didn’t want it to go out of date too quickly.) Kate had a lot of experience in producing and editing videos and with her background in illustration she was able to use animation with tools like TV Paint and Premier Pro as another way to engage the audience, with Kick the PJ and School Of Life being two of Kate’s influences.

Having a clear brief with regular communication was important so the video remained within scope. After researching the above ideas from YouTube it would have been easy to go off track, and although Kate had her own perspective of the library as a student it was important to emphasise the broad range of services the library has to offer so the video would appeal to all ARU students from each faculty. Although showed students using study spaces and services such as the help desk in the video, there are loads of other things we didn’t show – online resources, laptop loans, information literacy sessions so we had to be realistic that not everything can appear in a three-minute video.

Keeping the timeline of the project on track was another challenge, especially when consulting colleagues on the content as the video was developed. For example, the first cut of the video brought strong suggestions on how we could improve the narrative which weren’t flagged up at the storyboard stage. Although this did mean reshooting significant parts of the video it meant the second cut made more sense. This still brought some (completely different) suggestions on how to better represent the library but to implement these changes required a highly defined script and even more re-shoots. Getting feedback is fine but you sometimes have to draw a line when the video fits the brief (engaging, memorable and fun), so we had to remember we couldn’t please everyone.

One of the issues was that when using untrained actors (i.e. enthusiastic students and library staff) you can write a script, but the actors do not always say what you intended. We recruited our main actor Max Elgar (also MA Film and Television Production at ARU) for an initial half day of shooting then another for re-shoots, so every scene had to be shot in three takes at most. In this scenario, we kept the script simple for the actors to follow and we prioritised which scenes we shot first.

In terms of other practical considerations it was important to build in time for Kate to get to know the team, our procedures as well as learning office tools like MS Outlook which were important for planning and communication. Kate also had a mentor from our team not involved in the video, so there were plenty of support to help her develop her skills.