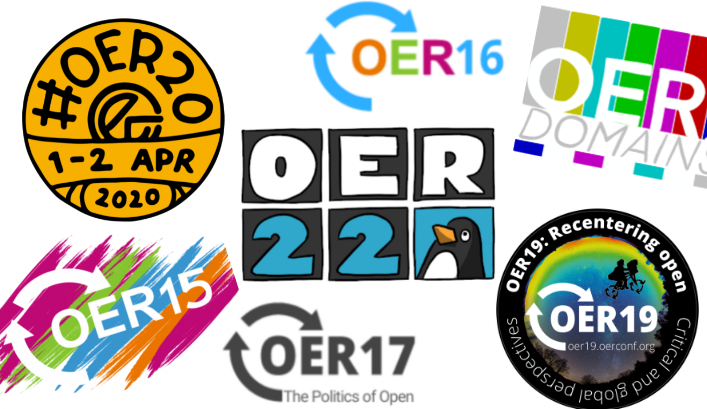 As one of the conference co-chairs, I’ve been reflecting on my own journey into the field of open education research. As it’s 10 years (!) since I first attended I thought it would be of interest to look back over the conferences I went to and do a bit of reflection about the trajectories, tensions and themes and how they evolved over time to lead us to where we are now.  As there’s a lot to cover, I’ll be posting in two parts.

Feel free to share your conference memories and reflections in the comments!

The first OER conference I attended was in 2012.  This was the combined event which brought together OER12 and the Open Courseware Consortium Global Meeting 2012 into one event, called Cambridge 2012.  I was still pretty new to OER at this point, and not long out of my PhD.  It was by no means certain at this point I would continue to work on OER, in educational technology research, or even at The Open University.  But the work I was involved with was a great crash course in what was going on.  I came on board in the last stages of the OLnet project and my main input was to collect together the evidence about OER collected during the project and assimilate this into the Evidence Hub for Open Education being developed by colleagues in the Knowledge Media Institute.

Lots of things here were new to me.  Beyond open education and the complexities of OER I was working with collective intelligence approaches which could support and synthesize many stakeholder perspectives.  But the nature of reviewing and putting together evidence meant I was developing a decent overview of the subject.  I also benefited from the privilege of interviewing OLnet Fellows (such as George Siemens) for the project.

You can access the archived group presentation at https://presentations.ocwconsortium.org/uk2012_329_learning_lessons_of_openness/.

I don’t know if it was because it was a combined event for two conference communities, but being at this conference helped me understand the global nature of initiatives in the open education space, and was the start of making really valuable connections and relationships in this space.  There was also something about a prestigious venue like Queens College, Cambridge, the internationalism, and the level the audiovisual/technical professionalism which left an impression.  Like many in this space, I also felt comfortable with the moral imperatives behind open education and could see the massive potential for impact.

By the following year the OER Research Hub project was beginning and I was part of a team assigned to systematise the available evidence around the impact of OER.  This again afforded  quite a privileged perspective on the proliferation of OER in different countries and contexts.  We worked with a wide range of collaborators, developing an international network that we are still using today.  One main difference in approach compared to OLnet was that we used a hypothesis testing approach to gather evidence relating to key claims made about OER.

At OER13 (University of Nottingham) we were at an early phase and presented on this logic model.  You can read more here.  In a way though, the more important thing at this stage was making human connections and developing a network.  (I think this is sometimes overlooked by researchers, but it’s always important unless you’re restricted to doing some sort of autoethnography.)  The conference themes were particularly apt for where we were in the proces – and maybe also where most of open education research had got to.

For the OER Hub model of collaborative, open research to work it requires a strong network and also for people to have awareness about what we were trying to accomplish. One of the activities we were using in the exhibition space was ‘OERchery’, a way of collecting opinions about some of the OER Research Hub hypotheses and whether they were thought important and/or provable.

I also recall Doug Belshaw’s keynote from this conference which was my introduction to open badges as a way of recognising informal learning (and live blogging).   Since this was my first OERx conference without the OCWC event running in parallel, I felt it allowed me to focus more on understanding the national picture and what was happening in different parts of the country.

By the time of OER14 the OER Research Hub was in full swing and reporting results.  I co-presented with Sara Frank Bristow on OER policies around the world and the overall picture emerging from Hub research.  Looking at the list of abstracts I get a real sense of how different communities were brought together by this event, with many colleagues from The Open University rubbing shoulders with OER Research Hub collaborators and Fellows.

I think it was around this time that the OERx conferences started to attract more international delegates and to be seen as an event of international significance rather than ‘just’ the foremost OER conference for people in the UK and Ireland.

I also recall this conference as one where there was a lot of interest in OER policies.  Apart from the session already mentioned, there were presentations from Simon Thomson, Alek Tarkowski, Paul Bacsich and Giles Pepler, Lorna Campbell and Gareth Johnson on this theme.

The venue for OER14 was Centre for Life, which is a pretty interesting place that I was glad to check out.

The growing international flavour of OERx was reflected in the participant map, which showed delegates had come from several continents to attend.

By the time of this conference, the primary activities of OER Research Hub were concluding and my focus was shifting to incorporate the OER World Map.  If you take a look at this blog post and then the OER World Map as it is today I think it really speaks to the growing internationalisation and community building that has taken place in the intervening years.

There was an ongoing focus on policy at this conference and several international speakers with expertise in this area (including Cable Green and Nicole Allen).  There were also quite a few presentations on MOOCs and OER impact which were the main interest areas for many and reaching a point of maturity where the impact could be reasonably assessed – although lots of areas remained contested and many suspected open education as falling prey to some sort of Solutionism.

In his closing keynote, Martin Weller characterised some of these tensions as the ‘battle for open’ which happens when we move from utopian idealism about what we want to achieve into the area of pragmatic application.

The conference took place at the Royal Welsh College of Music and Drama in Cardiff, another venue I was pleased to check out and otherwise might not have.

Edinburgh is always a cool place to hang out, and OER16 was no exception.  The weather was also glorious, as you might recall.

(There’s a cool archive of (other people’s) photos from this event on Flickr.)

Around this time I was presenting a consultation exercise called Open Research Agenda which I brought to a range of different meetings and events to try and get a sense of what people felt should be the priorities for open education research.  From time to time I revisit the themes identified to try and get a sense of how well anticipated the future was.  The most pressing areas for research were OEP, pedagogy, adoption, impact case studies, quality, awareness and sustainability; while the less important areas included advocacy, credentialing, discoverability, access, MOOCs, lifelong learning, inclusion,  accessibility and ethics.  I’m not suggesting this is a definitive, scientifically proven list as the main point was to stimulate thought and strategizing – and this list includes data from international stakeholders.  But if we were doing the exercise again now I’d expect more emphasis on the social mission of open education rather than adoption and evidence.  In some ways though, your priorities depend on where you are in the world and how mature your open education systems are.  OER16 was a chance to solicit opinions from practitioners in the UK and Ireland, an important link between practice and research.

One output from this exercise I still use is the following table, which tried to capture the tensions between different kinds of responses we received – here characterised as a tension between the desire to pragmatically influence and the ideological commitment to enhance freedoms.

Elsewhere at OER16, there were keynotes from Jim Groom and Catherine Cronin among others.  I think it’s possible to trace these same tensions across the themes they addressed and conversations had by delegates.

Another thing to note about this conference is that (I think) it’s the first time that GO-GN appears as an OER Hub led activity and I think must date from around the start of the transition of the network to The Open University.  Over the next few years there were more and more GO-GN researchers among the presenters as the network matured and increased its reach…

Register for the conference