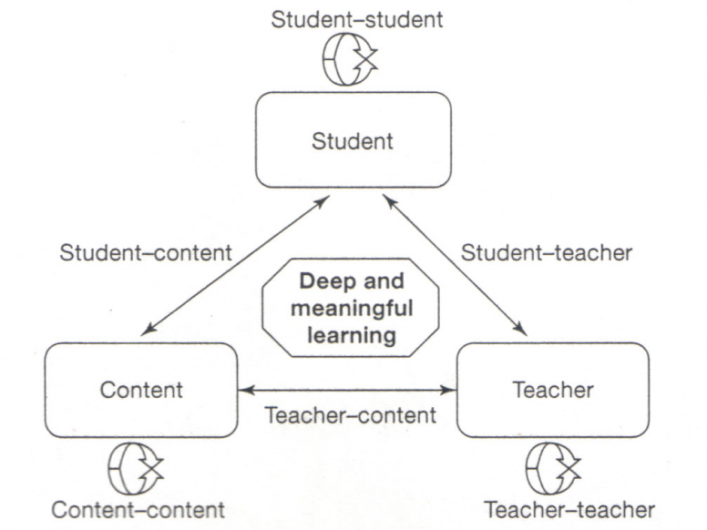 Getting the Mix Right Once Again: A Peek into the Interaction Equivalency Theorem and Interaction Design

It was in the spring of 2006 that I first encountered Terry Anderson’s Getting the Mix Right Again: An Updated and Theoretical Rationale for Interaction (2003), ― I could not get the ideas presented out of my mind. At that time, I was working in Tokyo, Japan, while enrolled in the online Master of Distance Education program offered by Athabasca University in Edmonton, Canada. Anderson’s article was part of our readings for the course, MDDE 603 Foundations of Instructional Design: Systems Analysis and Learning Theory. The reading list was sorted alphabetically, and being top of the list Anderson caught my eye t. Anderson is well known for the Community of Inquiry model (CoI) proposed by him and other colleagues (Garrison, Anderson, & Archer, 2000). The CoI refers to the learning community model that defines quality educational experience as consisting of social, cognitive, and teaching presence. It is Anderson’s work on interaction which interests me the most; work which has been dialogically developed with CoI model in his conceptual development.

I first became interested in interaction design in 2003. At that time, I was a distance learning student enrolled in another master’s program in TESOL offered by the Institute of Education in London. The program was managed using the FirstClass VLE, which supported a high level of online interaction among the course tutor and students. The class largely consisted of adult professionals based in various countries. Our primary means of communication were mostly text-based (in English), i.e., online postings and e-mails. At that point, very few institutions were offering completely online programs at graduate level , and this triggered my lifelong interest in designing the most effective and efficient balance of interaction in the online learning environment. Interaction has long been a key but contentious component of all distance education programs―often regarded as critical to quality, but both hard to define, and hard to afford.

Although I liked the content of the Institute of Education’s master’s program and completed the degree, I regret the fact that I was unable to achieve higher course grades because I felt trapped by the heavy requirement to participate in the online discussions. Instead of digesting the course content and devoting my time to learning at my own pace and writing course papers, I had to invest considerable amounts of time in the required online participation. In fact, near the end of term, so much of my energy had been devoted to the online interactions that I had little time left to draft the final paper! Therefore, while attending the Athabasca program, I planned to minimize my online participation by spending my time only on attending online events of interest to me  and on writing good course papers. I also aimed to maintain close relations with a small number of friends on the course who shared similar interests and goals, and just one member of faculty, whose wisdom and supervision I needed, Terry Anderson. Learning to focus only on things that interested me, I completed the program with flying colors and left it feeling that I had obtained much deeper learning with a much higher satisfaction than the Institute of London program. What made the two experiences so different? Anderson’s Equivalency Theorem helped me find the answer.

Getting the Mix Right Again provides a concise summary of Anderson’s two major works on interaction in educational contexts, namely the Modes of Interaction (1998) developed with Randy Garrison and the Equivalency Theorem (2003) defined by Anderson. Interaction and Independence: Getting the Mixture Right by Daniel and Marquis appeared in Teaching at a Distance in 1977, an organizational journal hosted by the Open University UK. In this article, the authors discuss “why we regard the balance which is maintained between them [interaction and independence] as the crucial issue facing distance education systems” (p.340). At that time, distance education usually employed independent study formats, and post and telephone allowed very limited use of interactive components in the learning process. As stated, the aim of Daniel and Marquis article was to clarify the problem issues involved in the “blend of interaction and independence,” which Garrison and Anderson needed to re-define again in light of the ever expanding potential of what would be known as online learning in the following years. At present, Terry Anderson and I are working on re-defining this due to a new wave of interaction brought about by the “blend” of face-to-face and online learning. It is worth noting that issues of interaction and independence are two sides of one coin and, as illustrated by my experiences at the Institute of London and Athabasca, even if a program provides different kinds of interaction with specific intentions, learners also adjust to it in a way which fits their personal needs and interests, leading to a more personalized and hopefully more effective and efficient learning process.

Moore’s (1989) “Three Types of Interaction” was the first model to systematically define interaction in distance education. It has three essential components, each viewed from a student perspective: student–content, student–teacher, and student–student interactions. Anderson’s Modes of Interaction (2003) extends Moore’s model to include the three dyads of teacher–teacher, teacher–content, and content–content interactions; these are viewed as indispensable components that combine to support deep and meaningful learning in online and distance education. The extension these three dyads is critical in understanding online learning: online learning can never be realized only by the teacher and student; instead, the adjusted model highlights a much wider learning context that realizes human and non-human interaction mechanisms that work “behind the scenes” in support of the learning process and its objects. A large part of the online learning process is supported by the efforts of the teachers (and in some well-documented cases, the combination of instructional designer, learning technologist, and subject matter expert) working together to produce and plan all the supporting systems for the online learning experience, that is, teacher–content interaction, before any kind of online learning can occur (Figure 1).

Anderson’s Equivalency Theorem (2003) is said to be the application of the Modes of Interaction. It aims to provide “a theoretical basis for judging the appropriate amounts of each of the various forms of possible interaction.” The main features are condensed into the following two theses:

Thesis 1. Deep and meaningful formal learning is supported as long as one of the three forms of interactions (i.e., student–teacher, student–student, and student–content) is at a high level. The other two may be offered at minimal levels, or even eliminated, without degrading the educational experience.

Thesis 2. High levels of more than one of these three modes likely provide a more satisfying educational experience, although these experiences may not be as cost- nor time-effective as those using less interactive learning sequences.

Figure 2 is a visual representation of Thesis 1 (CC NS SA by Miyazoe & Anderson 2012), It explains the “Equivalency Theorem,” as it refers to the “equal value” nature of the three different types of interaction.. The concept of “elimination” may give an impression that only a single kind of interaction is necessary; however, what the Theorem says is that all three interactions are equally important in ensuring “deep and meaningful” learning, as long as one of them is at high level and of very good quality. Therefore, in some situations, student–content interaction may be the most important, whereas student–student interaction may be the most effective. This visualization is slightly changed from our previous version (Miyazoe & Anderson, 2010a; Miyazoe & Anderson, 2010b) to hopefully emphasize the “high level” requirement of interaction more clearly. We should keep in mind that Thesis 1 sends out a warning: that we should not think that only one kind of interaction is always the best although, as a teacher myself, I would want to think that I am the most important component in facilitating learning among my students.

Figure 3 is a visual representation of Thesis 2 (CC NS SA by Miyazoe & Anderson 2012). It directs our attention to the fact that more variation and greater amounts of interaction types likely leads to higher satisfaction. However, such an approach is likely to be more resource and time-intensive, for both teachers and students.

While Thesis 1 refers to the quality dimension of interaction, whereas Thesis 2 refers to the quantity dimension of interaction involved to allow deep and meaningful learning to occur. The meta-analysis on interaction research from the Theorem perspective proposed by Bernard et al. (2009) helps us understand the impact of the theorem on our teaching and learning. For my learning in 2005, in a completely online learning environment, the interaction design of very high level student–content interaction, followed by the minimal level of student–teacher and student–student happened to be the best fit for me at that time.

It is important to remember that some of the Humanities fields, such as Education and Psychology, have the tradition of calling a working “hypothesis” a “theory” upon which good practice is developed. The Theory of Multiple Intelligences by Howard Gardner, for example, posits that we have several different ways of learning distinct from the traditional notion of ability as measured by IQ tests. While we cannot prove the validity of Gardner’s theory, it does help us to consider alternative ways to approach teaching and learning. In contrast Einstein’s Theory of Relativity explains natural phenomena thus, its truthfulness can be verified or refuted through experiments. In light of our discussion, Anderson’s Equivalency Theorem is, of course, in the first category because it is about teaching and learning.

The Equivalency Theorem is about utilizing the concepts of interaction design to raise learning effectiveness and efficiency. For this reason, we may also call it the Interaction Equivalency Theorem. The Theorem has now been included in the Distance Education textbook by Moore and Kearsley (2012), pp. 214–215, so has become part of the historical development of interaction research in the field.

In order to share Anderson’s work in interaction and what has been achieved thus far in the area of online and distance education, Anderson and I established a website, Equivalency Theorem or EQuiv website. It is newly opened and has more room for improvement. Nevertheless, we would like to invite you to take a sneak peek and see if it can help you in any way. Feel free to navigate through the site and let us know what you think! We look forward to receiving any comments and relevant information you would like to share on the website.

Anderson, T. (2003).Getting the mix right again: An updated and theoretical rationale for interaction. The International Review of Research in Open and Distance Learning, 4(2), from http://www.irrodl.org/index.php/irrodl/article/view/149/230.