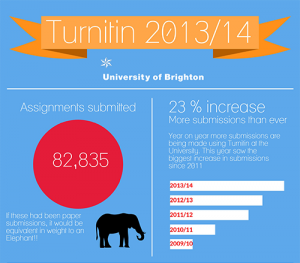 In common with many other institutions the University of Brighton has seen a huge increase in the volume of assignments being graded electronically and there is a need to ensure that a range of esubmission tools are offered in a clear and consistent manner to support our teaching colleagues.

Recently a question was posed by Tim Smale (Keele University) on the ALT members mailing list about contrasting two popular esubmission tools – Turnitin and Blackboard’s Safe Assign. Keele, like many institutions, has both tools available for esubmission, and comparing the two helps lecturers and teachers make choices when setting an assignment. Tim has set up a google doc logging his comparisons.

At the University of Brighton we also have both tools available. We have been using Turnitin as our main esubmission tool, primarily due to the added functionality of originality checking and a grading interface (GradeMark). Having recently upgraded our Blackboard environment, we now have these functions available in both tools. The SafeAssign originality checking tool is now integrated into the Blackboard assignment tool, which also supports inline grading. October 2014 also saw the release of the Bb Grader App, a welcome addition given the popularity of the Turnitin grading app here at the University of Brighton. As a result, we have been looking at making the same comparisons as Tim. Some initial comparisons of both tools are available here as a series of short blogs posts, recently updated based on the Bb Grader release.

At the University of Brighton we are also planning a larger project to compare the functionality of the two tools. This will look at:

On the ALT mailing list comparisons were also made between the Moodle esubmission tool and Turnitin. It would seem that Moodle’s assignment tool is improving with each upgrade (like Blackboard), and institutions are now looking to make better use of these ‘in-built’ tools as well as third party tools, such as Turnitin. Marianne Sheppard (Jisc infoNet) added some resources to the discussion, which include a Blackboard/Turnitin comparison and a Moodle/Turnitin comparison. Clearly this is something which other institutions are very interested in, as Louise Woodland (Cranfield University) commented: ‘very interesting debate – and timely for us too’.

Turnitin have halted any major releases until Spring 2015, having been purchased by Insight Venture Capitalists in June 2014 (turnitin.com). I get the feeling from various mailing lists that there is some dissatisfaction with Turnitin currently, and it will be interesting to see next year what new releases Turnitin announce and whether its functionality keeps their product ahead of Moodle and Blackboard.

As for us, we shall report back in the spring with our findings!