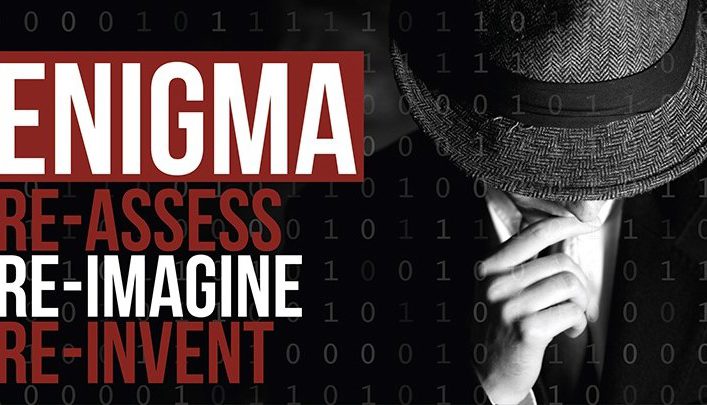 I arrived at Loughborough College ready for ‘an experience.” I had no idea what was in store for me over the next few hours, all I had seen was some feedback from when the event had been presented at Jisc’s DigiFest16. On registration for the event I was emailed a message from the character providing the narrative arc – Agent Sinclair.

We have been alerted to a potential information leak at our main site at Bletchley Park and you have been recruited as a secret agent to help us find the perpetrator. We will need to meet on 1st July 2016 at the HQ assembly point (identified on the attached map) at 10.00am. More instructions will be given at HQ before you are dispatched to your primary location.

The clock is ticking – are you ready for the challenge?”

This message set the scene for the day and detailed the aim of the session: a double agent was on the loose and it was our mission to recover the documents he’d stolen and get back to head quarters before it was too late!  I wasn’t the only attendee who arrived at the college feeling mystified, others said they too were feeling unsure of what was to come. We were excited at the prospect of doing something innovative and ‘different’. The whole event was themed around code-breaking, and was made up of several elements or ‘clues’ that needed to be solved before the mole could be apprehended.

The immersive nature of the session began as each group member was assigned an identity and a role. At first, the importance of these roles were not fully realised. It wasn’t until we began to work on the tasks together that these roles become crucial as each would play a vital part for successful completion of the Enigma experience. This element and the full gamification intention was discussed later in the debrief session after all attendees had completed the experience. Rachel Challen explained that the addition of the roles and identities within the experience had produced some very interesting responses. Assuming a role helped include all group members in all of the tasks and “give everybody a voice”, requiring each member of the team to be an active participant and take responsibility throughout the activities. After we had discussed our roles this video was played and we were fully into the ‘experience’!

In our rooms, each group was assigned a facilitator for the duration of the session. Our facilitator (Agent Ironmonger) gave short instructions at timely periods to explain the more technical elements of the tasks but would only offer prompts when absolutely necessary. This was quite unnerving at first but as our team got to grips with the tasks and became completely consumed by what we were doing, the need for input from the facilitator was minimal. The subversion of the role of facilitator within this session worked extremely well as the session was entirely focused on the participants as agents. The session became entirely participant-led. It was clear that this aspect of learning design is extremely powerful and can be applied to other areas of the curriculum and different participant groups, where the focus could be shifted to team building and relationship forming.

During the 90 minute session, we worked in small groups to figure out clues, follow instructions, break codes and answer questions using a variety of different technologies for learning. The various technologies were seamless in their use and complimented tasks that used more traditional teaching and learning methods. The session itself was meticulously planned and executed very well, each piece of the puzzle was carefully constructed to weave together Functional Skills, Maths, English, ICT, Digital Literacy Skills, Interpreting information and problem solving alongside soft skills of teamwork and time management. As we worked through the tasks, we jumped from offline to online, from image to text, paper to screen and from maths to science without realising the range of skills, experiences and past knowledge that we were applying. What was very impressive about the Enigma experience was the way in which subject ‘content’ was being delivered. In this instance, our group learnt about code breaking, various historical events in the development of the field of code breaking and the work of code breaking pioneers. This was in short a history lesson, brought alive by the various tasks and challenges and the application of what we were learning. 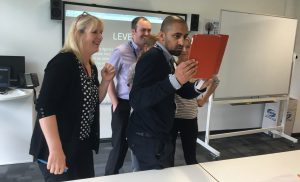 The learning space in which the experience was carried out was planned and designed carefully, with clues set up around the room and some red-herrings strategically placed among them. The room was staged so that the activities, both online and offline took place in front of the Smart Board which provided the ‘console’ in which the codes and code cracking questions had to be inputted. There were no chairs within the room just a central table, scattered with clues and resources. When asked about the setup of the learning space, Andrew Ironmonger (our facilitator) said that the idea of providing seating was discussed several times, as a traditional classroom based CPD session would “naturally have chairs, particularly if it was 90 minutes in length”. What I found interesting was that I didn’t think about sitting down once due to being completely engrossed in what I was doing which is something I shared with the Loughborough team at the end. I was not alone in picking up on this and as we discussed the design of the learning space in the debrief it transpired that no participant had ever sat down or asked for a chair at any point throughout the activities since the day was first delivered. I found this fascinating and it got my mind racing about the possible set ups for future staff training sessions.

The Enigma experience was a unique and highly inventive way to bring alive continual Professional Development for educators.  Designed and delivered extremely well by the Loughborough college eLearning team. Having taken extensive notes and taken away a host of resources from the day itself, I hope to plan a similar event within my own institution.