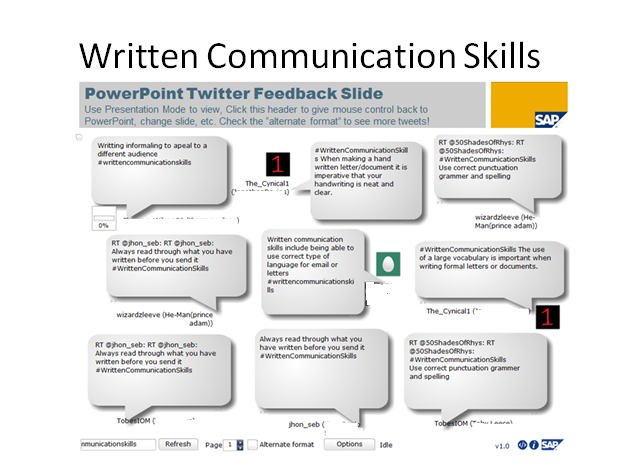 In a recent practitioner- research study in a Computing department at University College Isle of Man, I explored the literacy practices of students studying for a Diploma in Information Technology (IT). This involved examining similarities between their everyday and college-assessed literacy practices and the texts they produced. I took a social semiotic approach to consider how literacy can be viewed as social practice, complemented by a multimodal approach to understanding digital texts produced as instances of literacy practices.

Twitter is a social networking site where virtual micro blogging takes place by connecting people in real time. Gillen and Merchant’s (2012) concept of ‘virtual existence’ offers a way of understanding the relation between features of the digital texts and the environment (virtual and real) in which tweets are constructed. They clarify that tweets are sent by keying ‘shorthand for the various ways of producing a tweet’ in ‘letters and spaces’ to ‘constitute our own utterance’. 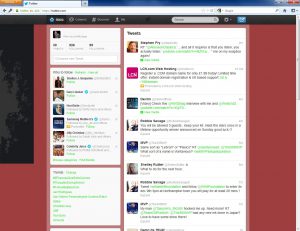 Synchronous Twitter messages or tweets created on a screen are viewed chronologically and new tweets regularly update the user’s site, consequently Tweets have a sense of virtual existence (Gillen and Merchant, 2013) which means the tweets received and the re-tweets sent are re-contextualised and take a new appearance, that is the original tweet was reproduced in another place and his re- tweets appeared on his follower’s sites giving a longer existence and wider dispersion to the tweet. The re-contextualisation of a text raises issues about the durability of texts and Minocha and Petre (2009) use the term ‘permanence’ to explain the idea that once posted digitally a text can be used and re-used for a very long time, and one has little control over its interpretation or replication. The texts ‘permanency’ is partially determined by the network provider and partly determined by the person posting the information.

Introducing this everyday digital literacy practice into the classroom was achieved by classmates sending Twitter feeds to respond to an assessment task. Students created a new Twitter account linked to their college email to maintain privacy and they used a #hashtag to communicate within a closed group. Figure 2 shows a screen capture of a set of Twitter

feeds that classmates sent for their assignment work. By using Sap Web PowerPoint tools, Twitter feeds were inserted in speech bubbles on a PowerPoint slide and regularly updated as newsfeeds with the same hashtag which were received in the Twitter account. The hashtags sent on the Twitter site organised the tweets and the layout of the Sap Web tool organised the presentation of the tweets. The update of the newsfeeds reflected in the slides indicate that students were collaboratively engaged in reading and writing using software that enabled meaning-making to shift ‘moment by moment’ (Gillen and Merchant, 2013, p.11) to engage in sociocultural and specifically, collaborative learning.

Looking in detail at both the literacy practices of young people and the texts they produced, as a teacher, I have found it possible to ascertain what is going to be advantageous to students for future educational success, employment and various aspects of life. It appears that using digital media can connect their everyday with their college-assessed literacy practices in terms of reading and writing on the screen. If a careful selection of the media, modes and genre used for assessment are made it would allow knowledge to be brought into the classroom. This would in turn enable greater congruence between young people’s everyday and college-assessed literacy practices.

Dr Adele Creer is an Lecturer HE and FE, University College Isle of Man, @AdeleCreer, www.linkedin.com/in/AdeleCreer