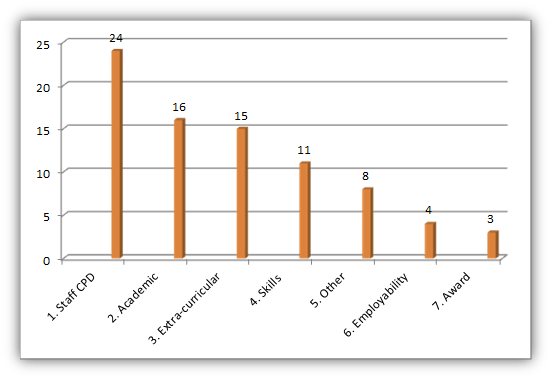 What areas are you considering using Open Badges for?

Implementation of Open Badges in Education

The majority of the responses were from UK organisations, with 51 either providing the name of the UK institutions, stating the country they are based, or leaving that question blank. There were 6 organisations based outside the UK.

The results of the survey show that there is a lot of interest in the use of Open Badges, but the majority of institutions are at an exploratory stage. The concept of Open Badges seemed to be accepted as a valid one, but there were several issues raised that are inhibiting the adoption of Open Badges.  These issues fall into two main categories:

Can you describe what stage of the implementation of Open Badges are you at?

This was the hardest question to break down into meaningful categories. The data provided allowed for an educated guess as to the correct category to be placed in. Each institution was assigned to one category only.

Most institutions are exploring the potential for Open Badges and considering different use cases. Some are looking at the VLE implementation of badges and others are looking at policy frameworks.

There were only 3 UK institutions, and one outside the UK fully implementing badges.

“We have built our own badge issuing system, which enables us to issue badges for ‘offline’ achievements too. We have issued over 100 badges to date, these have been for a number of skills/achievements.”

“We have built an issuing platform and are issuing badges for collaborations we’re engaged in.”

Option 6 (Anyone can award badges through the VLE) corresponds with organisations that have enabled badges within the VLE but has no institutional policy to embed these.

What areas are you considering using Open Badges for?

Open Badges has a wide range of possible applications. Organisations were surveyed to discover what applications of badges they were considering.

The most popular use for Open Badges was CPD with 24 out of the 58 responses responding with this option, and in most cases this was Staff CPD.

The second most popular purpose for badges was in an academic context.

“…badges are being considered as a way of recognising those who complete components of the online course.”

“Recognition of contributions to the university”, and “MOOCS” were two examples of responses in the Other category.

How are you planning to issue the Open Badges?

Issuing Open Badges has complications. The longevity of a badge needs to be considered as the criteria URL inside the metadata will point back to a URL at the issuing institution. The vast majority of organisations are, or are considering, using their VLE to issue the badges. Both Moodle and Blackboard have this functionality as standard within their latest core release, but respondents questioned whether this was fit for purpose.

“Have awarded a couple via Achievements but wish there was more meta data available – as ever Blackboard have delivered only 75% of the solution and attention has moved on.”

“Looking at Blackboard but not convinced by their solution. Will also look at third-party/local infrastructure”

If the course that awarded the Badge is deleted, or the VLE is changed to a different supplier, does the badge URL remain in place? If there is no expiry date on the badge, how long is the institution obliged to keep a criteria URL available?

“However, before technical deploy a lot of up front consideration needs to be made including (but not limited to): the badge ecocycle, branding & design, badge value and worth, staff & student training, expiration, hosting and display.”